Skip to content
HomeReviewReview: “Eradication” by Eaten By Sharks

It’s been nine years since 2013’s “We’re Gonna Need A Bigger Boat” landed from Canadians Eaten By Sharks, a record which opened the doors to sharing stages with everyone from Revocation to Emmure. Their return was inevitably hampered by a Global situation that changed the World with the band originally set to record in 2020 but finally we have our greasy paws on “Eradication” produced, mixed and mastered by Chris Donaldson (Cryptopsy, The Agonist) and on the strength of that first record alone it offers much promise. A concept album it finds Eaten By Sharks splice their take on Technical Death Metal with the apex predators of the ocean to offer us a nautical-themed first-person horror experience they hope we’ll never forget…

… Intriguingly the band cut down twelve tracks to seven for an album that represents half an hour of power that begins with “Shallow Water“. A swirling cut of odd time signatures and catchy riffs that have that air if familiarity about them which make for something instantly gratifying. Surprisingly enough, it’s not actually as brutal an offering as one might think, instead offering something menacing and sinister that packs plenty of groove in the riff department while the innocent die in a bloodbath of a cover in the narrative. “Dead Weight” then picks up the mantle with Matt Sherriff’s throat grating vocals offering some clever pitch changes to emphasise specific words. Maintaining the high energy tempo, Chris Chaperon injects the melodies with some slick leads so the band aren’t solely reliant on those bone crushing breakdowns to make you move. Floating between Death Metal and Deathcore “Kill and Consume” has an artillery shelling of blast beats that sees drummer Justin Whitehead challenging the genre greats for supremacy before the pick slide opening of “Same Face, Different Mask” grabs the attention. The odd time signatures of this barbed vicious little ditty make for a powerhouse statement piece that showcases they bands abilities to ink complex riffs that they can slickly transition into those that provide plenty of bounce. It’s the one that doesn’t fit the brief of the concept lyrically instead offering something more personal but that doesn’t matter as the result is equally as powerful as anything else on the record. “Depth Charge” by contrast returns to the narrative, a Man Vs Shark fight to the death with satisfying stuccato riff breaks overlaid by tight leads before the sinister and brooding “Apex Predator” cuts loose with an interesting sonic dynamic and an ocean of groove. The evidence maybe washed away with the tide but tale of violence is documented in bloody detail here, the nuances popping out of the mix on multiple listens. Fortunately “Megalodon” isn’t a retelling of the Jason Statham film but instead a brutal cut about awaking an ancient hell with some of the finest riffs on the album. Combining new and old Death Metal influences, Eaten By Sharks have proven themselves to be a cut above the competition at the top of the food chain [8/10]

“Eradication” by Eaten By Sharks is out 26th August 2022 and is available for pre-order over at bandcamp. 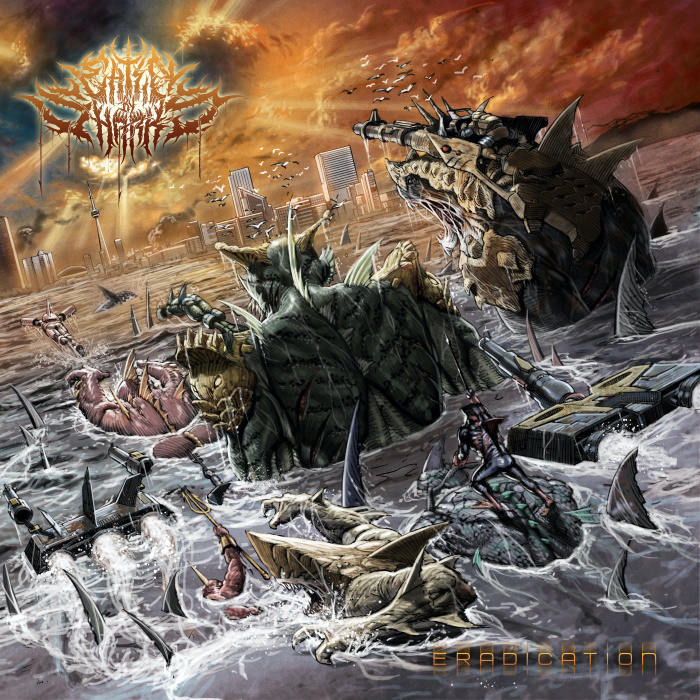