It seems that Australian Metalcore act In Hearts Wake are going to style shift somewhat with their next album if single “Worldwide Suicide“ is anything to go by. That was released a couple of weeks back and now the band have offered a PhaseOne Remix of the track as they prepare of something that will follow
Read More

Australian Metalcore act In Hearts Wake have dropped their first new music video in nearly 3 years with a brand new song going by the name of “Worldwide Suicide“. Having had something of a style shift with their last album “Ark“, it seems that they’ve gone an entirely different route with this new track which
Read More

Digital Tour Bus caught up with Australian Metalcore crew In Hearts Wake on 23rd July for this newly released clip. The latest episode of their “Bus Invaders” series took place at the Summerfest Showgrounds in Milwaukee, Wisconsin with the band playing a number of Vans Warped Tour stops. Something about 2017’s “Ark” being released in
Read More

Drum Cam footage of Australian Metalcore crew In Hearts Wake sticksman Connor Ward performing “Refuge” at the Cuyahoga Falls, Ohio stop of this summers Vans Warped Tour. The bands current album “Ark” has been released in deluxe format with a guest vocal from Chris “CJ” McMahon from Thy Art Is Murder.
Read More

Bryon Bay’s In Hearts Wake have released a stream of “Elemental” from the deluxe re-released version of their album “Ark” which features none other than Thy Art Is Murder frontman CJ McMahon. It’s something of an odd collaboration on paper given that the Metalcore crew’s album “Ark” is more melodic and obviously McMahon is a
Read More

Byron Bay, Australia Metalcore crew In Hearts Wake took part in a new series from UNFD records entitled “Yay or Nay”. The band are currently touring the deluxe edition of 2017’s “Ark” released via the label – yes, we gave it a pretty low score in the review, but we also reviewed their live show at
Read More

Now when I say “official live video” it’s snippets of the song performed live in front of larger audiences nicely edited with the album version played over the top. “Frequency” is taken from In Hearts Wake‘s current album “Ark” out now via UNFD. In Hearts Wake are currently touring the UK with Gideon and Silent
Read More 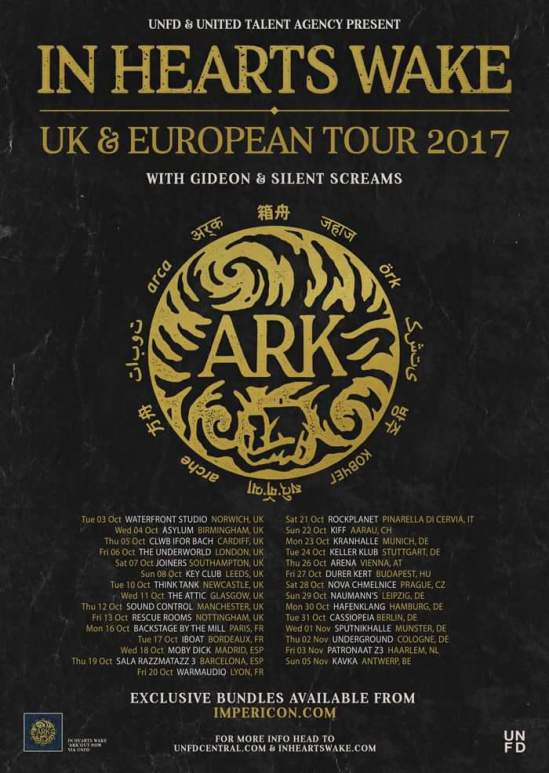 I discovered Byron Bay’s In Hearts Wake when they supported Bury Tomorrow on the “Runes” tour. I didn’t know them from Adam and their live show was something to behold, a surprise magical moment. At that time they were supporting their second album “Earthwalker”, a Metalcore masterclass and it’s follow up “Skydancer” is also along similar
Read More