Skip to content
HomeReviewReview: “Kaliyuga” by In Hearts Wake

It’s safe to call Byron Bay natives In Hearts Wake veterans of the Australian Metalcore scene at this point with their debut album “Divination” dropping eight years ago in 2012. They’ve toured the Globe relentlessly and we’ve had the pleasure of their live show twice, once on the “Earthwalker” tour and more recently when they were supporting 2017’s “Ark“. Each of their previous albums have had thought provoking narratives about social and environmental issues making up a sizable proportion of their lyrical themes and while that was true of their last album “Ark“, there was some musical trade off. While on previous records unclean vocalist Jake Taylor was at the fore front of the bands sound, on the last one bassist Kyle Erich got more clean vocal parts and appeared at the fore on a number of cuts. The problem was that those cleans sounded forced at times, something that wasn’t an issue seeing those same songs performed live. However that didn’t stop the album getting a deluxe re-release with guests CJ Gilpin of Dream State and CJ McMahon of Thy Art Is Murder making appearances on a couple of the bonus tracks. This time out they’ve switched back from Will Putney to Josh Schroeder for the producer, the man who handled three of the four of their previous records…

…If the post-hardcore isms and influence from the likes of We Came As Romans on “Ark” was one thing, the late 90’s break beats and electronica of “Crisis”, accompanied by a repeating sample about a house of fire is a style shift in a completely different direction. Pre-release single “Worldwide Suicide” gave us an insight into something like that happening with it’s air supply choked off vocal moments and break beats, unclean vocalist Jake Taylor reaching some new found Deathcore growl lows which are really something else. In Hearts Wake haven’t made the completed a full shift though, they haven’t done a what Northlane did with “Alien“. That’s apparent from single “Hellbringer” which sees a plot twisting into the Technical Metalcore sound with a bright, soaring chorus and the presence of Jamie Hails from Polaris on the cut adds an extra zing to everything. The opening trio are like a breath of fresh air in comparison to what held “Ark” back, with fresh impetus and drive in the bands sound. “Moving On” however feels like a partial step back. A big chorus fueled, arena filling sound with Kyle Erich taking the vocal lead and some post-hardcore aesthetics make the song feel like its by completely different band. Jake Taylor is reduced as he was on “Ark” as largely a backing vocalist and it’s a real shame, though at least those cleans no longer sound forced. Perhaps Erich has learned to control his voice better during the bands previous touring cycle.

The comes “Timebomb” and while Taylor’s increased uncleans are a pleasure, a mid tempo chugger with a cringe worthy unclean rap is far from what the Doctor ordered. Staccato riff segments offer some crunch but the while track sounds awfully dated and as far from the previous tracks as you can get, the pendulum swinging the opposite way. “Son Of A Witch” papers over some of the cracks by combining some of the guitar work from the earlier tracks but again the unclean rap vocal moments drag it down. Erich may not be Jonny Craig but his vocals are very much improved on this one and his chorus save it from being the mess that “Timebomb” is. The second guest of the record is Georgia Flood, an Australian Actress known for appearances in American Princess and Her Come the Babibs. Her vocals on “Crossroads” are suitably impressive but for In Hearts Wake, we’ve gone from Technical Metalcore to a pop-rock track with a rap over arch that just sounds like an experimentation too far. As a standalone song, if you heard it on the radio, in casual listening, it’s nothing special. At the center of a record that started off with a trio of very impressive cuts, it feels awkward with rich melodies and from Flood that sound middle of the road. “Husk” is Erich’s opportunity for some rich melodies of his own and in a song with a mournful air, he carries it off in some style, the early Alternative Metal riffs making way for some interesting Deftones isms making way for some almost tribal drum patterns and acoustic mood music to close.

The cinematic introduction piece that is “Naga” sounds like the rising of Godzilla from the ocean to walk on Japan and serves as an instrumental piece cut from the start of “Force Of Life” for no apparent reason. The later is a stomp-a-thon of a cut with a fist pumping chorus that should go down well live due to its more aggressive leaning verses and staccato riffs into breakdown moments, although it doesn’t hold together as well as it could have. Having had the unclean raps from Taylor on the record earlier “Iron Dice” brings them back with a vengeance. A moody track that has Nu-Metal undertones and a guest appearance from Randy Reimann of Massappeal, it has more weight, but not the structure to support it and comes off half baked. Another mid album, mid tempo chugger in “Dystopia” lacks fresh ideas but sounds like a breath of fresh air compared to some of the other material, Erich again being a vocal highlight. The beefed up Post-Hardcore isms make In Hearts Wake sound like Slaves while the more aggressive closing moments are a much needed boost. Sounding like a hybrid track from the Spawn film soundtrack “2033” has enough bounce to carry it through and had it been earlier on in the album, it might have saved things. You may note that during this review there has been very little mention of the guitar work; according to the release notes there are two guitarists in the band with Ben Nairne handling rhythm and Eaven Dall handling leads. There are no leads and no solos and the album sounds like it has a single guitar on it, there wouldn’t be a need for a second player to play this material. In summary, there is an EP of really solid material here and the rest is flat and distinctly average, you could cut four tracks from this and you’d have a better album for it, which is a shame given what this band are capable of and this record lacks the sense of direction they so badly needed after “Ark” [5/10]

“Kaliyuga” by In Hearts Wake is out now via UNFD 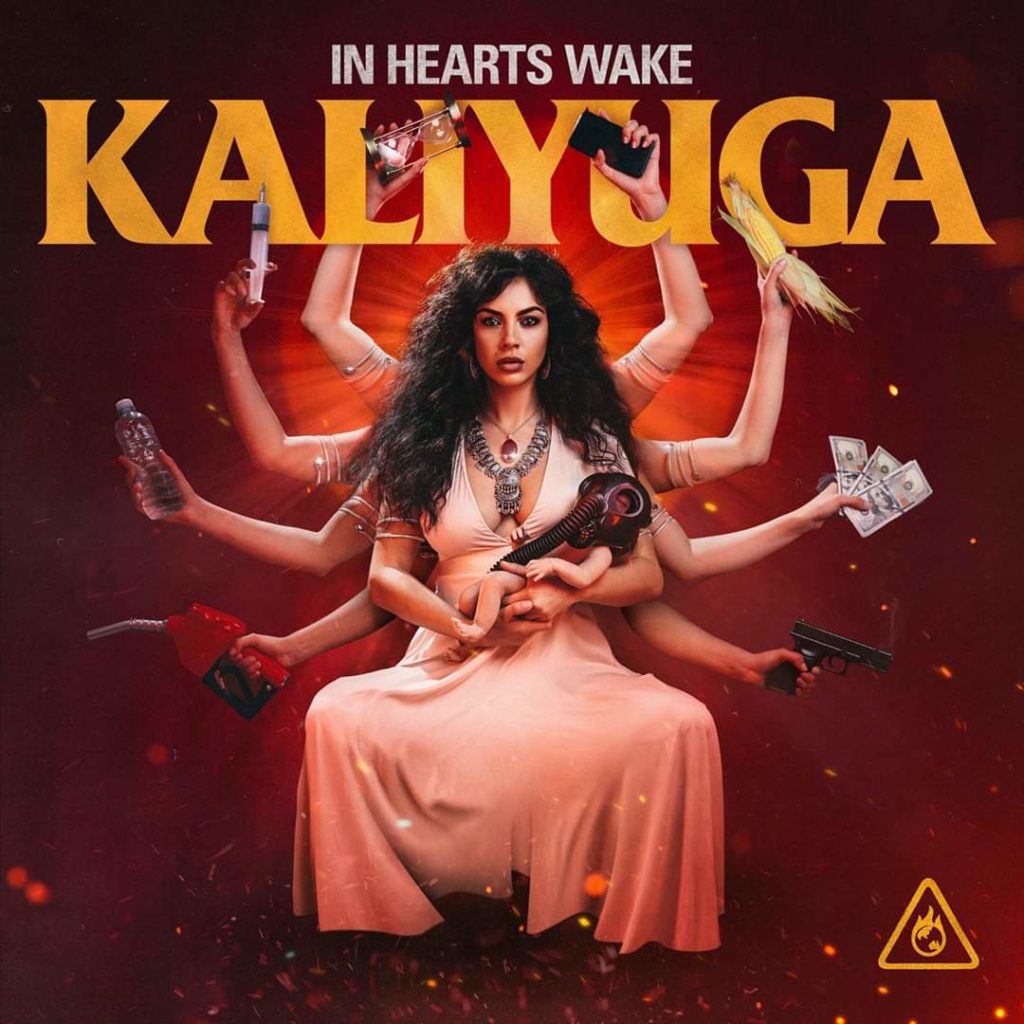