Filmed at Nagoya Japan’s Blare Fest 2020, here’s Dallas Texas Nu-Metalcore act Crown The Empire performing single “Red Pills” from their recently released album “Sudden Sky” in front of 18,000 fans before the Great Plague took hold. The event is one organised by Coldrain, retuning the favour that they received when they were invited to
Read More 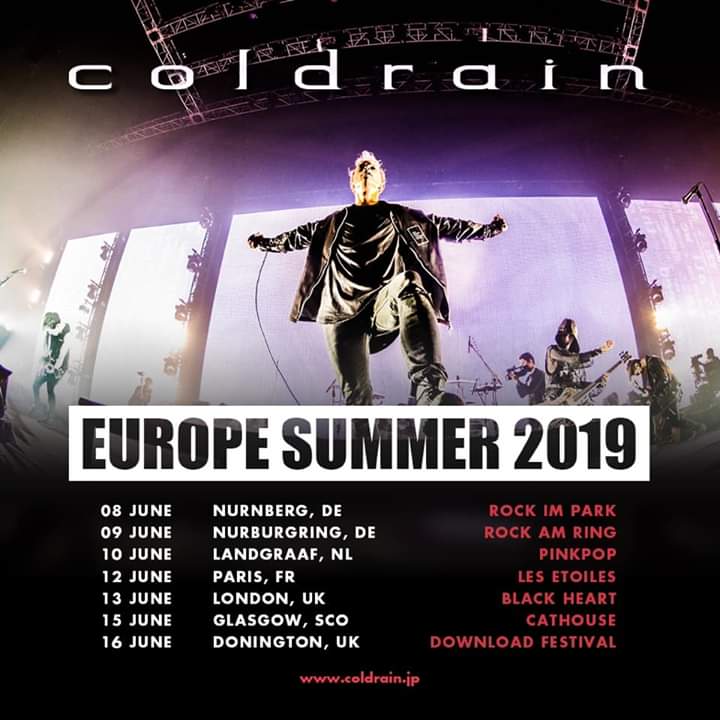 Incase you missed it, Japanese Metallers Coldrain will be back upon our shores for a trio of shows in a European Festival run this summer! Having previously joined Crown The Empire and Volumes here last winter and going down a storm, the band will be back to make some *ahem* thunder of their own in
Read More

Japanese Metallers Crystal Lake were joined by Coldrain frontman Masto at the release show for single “The Circle”. Masto reprises his role on the song as the band play a free show that also includes “Lost Forever” and “Overcome”. Coldrain themselves will be upon our shores with Volumes and Crown The Empire on a tour
Read More

Crown The Empire are upon our shores with Volumes and Coldrain on a tour that starts on the 18th September! They’ve released a mini “making of” for recent music video “20/20” earlier today, which offers some interesting insights. Let’s hope the next album is a return to form after “Retrograde” via Rise Records.
Read More

Destined to be upon our shores in September with Coldrain and Volumes, Crown The Empire have released a video for recent single “20/20” shot at this summers final incarnation of Vans Warped Tour via Rise Records. The band still have some limited merch from their Warped Tour run available here.
Read More

Japanese Metalcore crew Crystal Lake will be back upon our shores in December with Bury Tomorrow, Cane Hill and 36 Crazyfists following their successful summer European Tour. The band have a new 3 track single releasing today and featuring a number of well known guest appearances, detailed as follows; The Circle ft. Masato of Coldrain
Read More

Crown The Empire, who will be upon our shores with Volumes and Coldrain in September, have released a music video for new single “20/20”. The song is taken from an as yet untitled new album and is available here. It also marks the bands first release without David Escamilla (now in Bad Fortune), who exited
Read More

Volumes, Crown The Empire & Coldrain have announced a European run in September & October with 11 (yes, Eleven!) UK dates at the start of the tour. Seeing as Volumes are the heavier band of the trio, it should see Crown The Empire upping their game following the disappointment of their most recent offering “Retrograde”.
Read More