Skip to content
HomeReviewReview: “The Sinister Business of Selling Hope” by Exitium Sui

“Over the last year, I had suffered delusions, horrific dreams I could not escape and psychotic episodes due to past traumas I had somehow managed to repress and neglect. The state that I was in, combined with my active reading of postcolonial and post War literature got me thinking about trauma and its lasting effects on the human psyche. I started to explore the idea of mini psychological wars bearing similar consequences. We obviously live in what we are told are times of ‘peace’. War is used as a comparative tool to remind us that things could always be worse. Subsequently it is used to sell hope while we explore just how dark society can get without military intervention. The fear that the past may reoccur haunts us and controls us. I am of the thought that ‘peace’ is just as dangerous as war as it is human nature to destroy and rebuild. The past is the present, as anyone from Australia, Canada, the United States, South America or the Europes would understand. Dispossession and discourse can not be undone and neither can the psychological damage associated with it. Instead of dwelling on my own hardships, I decided to write something constructive to outwardly project my hatred in a way people can relate to. For anybody that has been hurt or had to hurt another against their conscience in the name of survival. This EP is for you. For all the guilt, the hurt, the un-belonging.” – ES.

German Multi instrumentalist E.S. has played a part in a trio of bands that have made their own mark on Metal in Humanitas Error Est,  Deadspace and laterly Cancer and while when performing live with Exitium Sui these songs are performed as a quintet, in the studio, this is strictly a solo project. That means when it comes to “The Sinister Business of Selling Hope“, he played bass, guitars, drums, synths and performed vocals, as well as recording and mixing. As if that wasn’t enough, he also hand painted the cover art in oil colours. The only outside influence on his vision was Simon Struthers at Forensic Audio, who Mastered the four tracks.

Falling into the spaces between Black Metal, Death Metal and Doom Metal is where you will find the sound of Exitium Sui. The raw nature of Black Metal has been captured in the recording and after a mournful introduction to “The Sinister Business Of Selling Hope“, the Asylum doors are swung open with the patients running free. Blast beats shatter the windows, the rabid vocals of a banshee possessed by a demon with a touch of schizophrenia then plays with the broken glass, covered in blood while smiling an evil grin. Synths add a meloncholy feel while providing a level of sanity that is not found for example in the works of Snorlax or Resin Tomb and as we race into the sinister and haunting “Into The Molten Jaws Of Death“, it’s clear that there is no instrument that creates a weak link in the performance of this multi instrumentalist. The spitting, snarling, venomous vocals are bloodcurdling, the riffs are unhinged and the drums are as impressive as the work of Gene Hoglan but with more feel.

The atmosphere is dark and oppressive and when “Blood, Flesh, Malice.” takes hold, it simply doesn’t let go, dragging you kicking and screaming with it. The guitar tone is strictly Black Metal but there are mournful melodic passages within the folds of this one to accompany the impaled screams that give it grit, integrity and gravity. The march of troops introduces “While The World Waits On Their One Last Breath” with a sense of impending doom and synths once again underpin the herculean drum performance that is unrelentingly brutal throughout. The musicanship is impressive but the way that the songs have been constructed is equally so. Each one having a distinctive flow and melody as well as being a punishing listen and combining those abrasions with that melody to create something special is no mean feat [8/10] 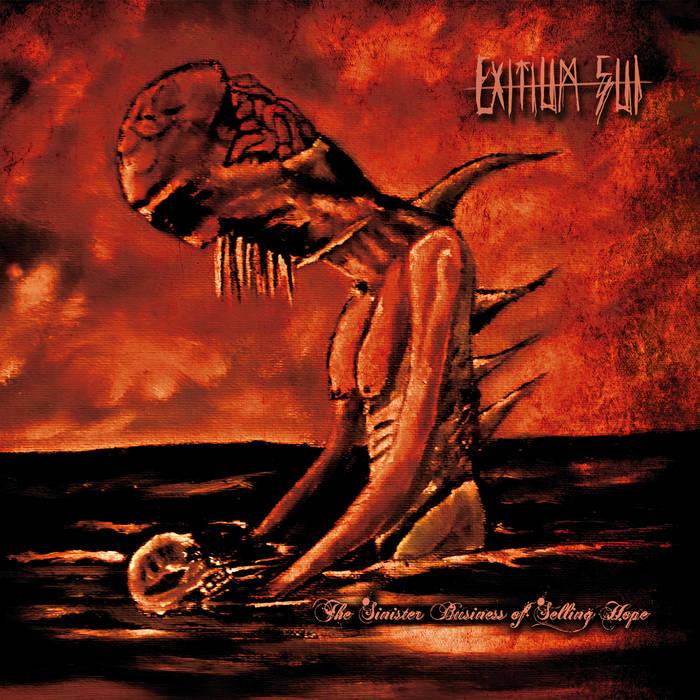