Devourist are a band you will know by the trail of the dead that has been following them from Columbia, Missouri to anywhere they lay their collective hats as they combine Death and Groove Metal in uncompromising fashion while enjoying a concept release. We reviewed their EP “Origin” a little while back and spoke to them about all manor of other Worldly things in this exclusive interview.

There is a heavy Science Fiction aesthetic with your lyrics and social media. Who are your influences in Science Fiction and how have they had an impact on you? I guess we would say that there is a fine line between science fiction and reality, which is where we like to explore the spongy membrane between realities.  We are drawn there by many figures throughout time, including Kepler, JJ Abrams and Tesla, but not in the order. Whether it be swallowing worlds or just aliens in general, we found a perfect window of opportunity to form a beast of our own and implement that into our music. It enabled us to create a versatile universe that we can play with on and on again.

The artwork for “Origin” is absolutely stunning. How did you find Adam Serrano to create it and what was it like working with him? DP (Bass) and Adam S. found themselves practicing the dark arts under many moons in Lancaster, PA under the pseudonym Sovereign, and have vowed to continue their creations in some form or another after DP’s departure from Dutch country.

You’ve shared stages with everyone from Visceral Disgorge to Skyburial; who have you enjoyed playing shows with the most? Do you see yourselves as road warriors playing club shows or do you prefer that festival vibe? We’ve had some awesome opportunities to play with some great bands for sure. Signs of the Swarm is one that stands out in particular that has become so intense live. Local bands have always had a special place with us and where we come from with being in such a great community of talented musicians.

“Origin” is your debut EP but it doesn’t include your first single “In Vivo“. What was behind the decision to cut it adrift as standalone, rather than re-record it in the “Origin” sessions? Moving from “In Vivo” (which was our first single release via YouTube) to “Origin”, changed a lot within our structure. Devourist was originally formed as a 5 piece with another guitarist. After a long starting course of development, the addition didn’t quite stick and “In Vivo” became one of the many original tracks that we decided to keep so the lyrical content just didn’t flow with the concept of “Origin” that was developed later on down the road.

You returned to Todd McVicker at Sigma Studios for the tracking, mixing and mastering of “Origin”, having worked with him on “In Vivo” back in late 2019. How important was it to get him back on board, to get the right mix for the sound you’re creating? Entering the studio to record “In Vivo” was our ‘test’ you could say, as to where we thought our sound would be captured best locally. Needless to say Todd and Lionsnake Productions exceeded expectations so returning to him for “Origin” was no question.

If you got the opportunity to come over to Europe to play some shows, who would you like to share the stage with and why? We could picture you decimating the audiences here with a band like Rings of Saturn? A tour with Rings of Saturn would be an amazing opportunity that we couldn’t turn away, obviously. We would love to tour Europe as we think our sound could be well received there and blend with many different genres of metal. The Aciients and Slugdge to name a few, because they understand what it’s like to be born in the wrong universe.

“Origin” by Devourist is out now and available over at bandcamp. 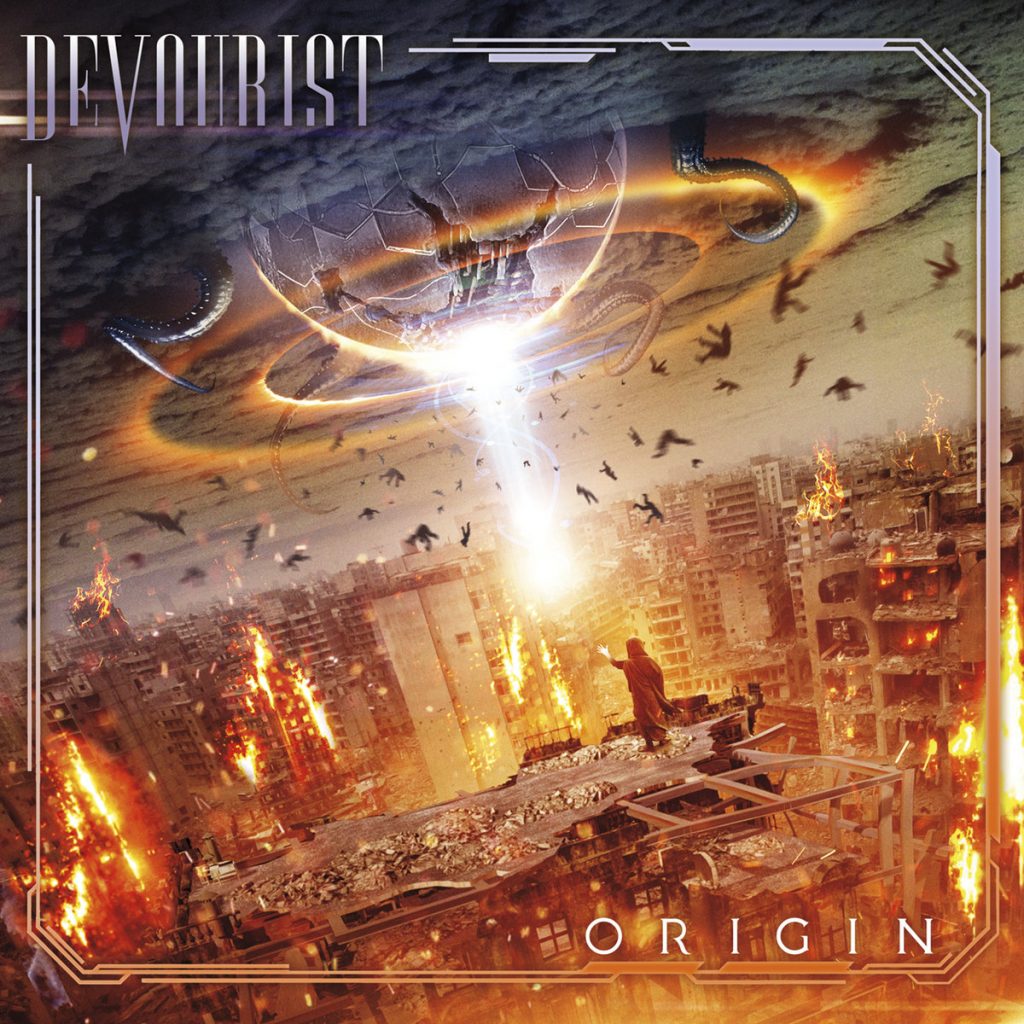