Belgium Hardcore crew Nasty have been playing anywhere from Europe, USA, Russia, Brazil, Japan, China and Korea since 2004 while also sharing stages at countless well-known festivals such as Wacken Open Air, Hellfest, Graspop Metal Meeting, With Full Force and Resurrection Fest to name but a few, hammering out 6 albums and 2 EPs in that time. This time around, with some of Paddy’s guitars tracked on line and vocalist Matthi doing all the vocals and backing vocals himself, they recorded their seventh studio record with Andy Posdziech (Any Given Day) who also mixed the affair, with mastering done by Alex Kloss (Any Given Day, Toxpack, No Turning Back). The rest of the band in rhythm section of Nash (Drums) and Berri (Bass) did manage to get studio time with the album entitled “Menace” completed using inventive methods. As the band put it, the album is “F***ed up music for a f***ed up world” and it has a front cover done by artist Michael Shantz (Bring Me The Horizon, Your Demise, Drop Dead Clothing)…

…first single and first track “Ultimate” lays down the gauntlet with punchy hardcore grooves and Matthi’s heavy hitting vocals delivery the goods; they’re raw, emotive and venomous. There is a rage bottled up and they’re letting it out with a huge final breakdown. It’s heavy with touches of beatdown, which is a register more than previous Nasty records. “Bulletrain” rains hell with artillery shell precision, a sub 60 second neck breaker of a cut based off of a single verse that ends on the echo of a scream. Album title track “Menace” has a brilliant pick slide moment and circle pit rhythmic grooves; the Matthi’s backing vocals use a different voice which works really well on this hammer heavy cut as a point of contrast that perhaps makes up for the absence of any guest vocalist here. “Be Careful” does the same thing with Matthi offering up a couple of sung lines that fit perfectly in a melodic break that makes up the chorus. It has that gang chant ability that the band do so well, something that has gone down well over the past 16 years of killer live shows. Second single “666AM” does a nice tempo shift from a two step to some downtempo breakdowns at the end, the whispered vocal lines add a menacing touch as the band have clearly worked on their ability to deliver an atmospheric and create a tone…

…”Tricky Plays” has more of a Hatebreed energy to it, proving that you don’t need a twin guitar attack to create a big hardcore sound; a p***ed off attack against someone who has “sticky hands” and is thieving from the band and that rage threatens to boil over in “Betrayer” before Matthi adds in some cleaner vocal lines rather than going all out beatdown. Each track delivers a pulverizing rhythmic assault that makes you want to get in the pit, its infectious while being easy to listen to; within a few spins you’ll find yourself singing along with it and subconsciously banging your head; it’s that kind of record. “You Will Know My Name” punches like a Lionheart track without any of the rap flow; life is pain that you’d better get used to being the message behind this one before “Inhale/Exhale” comes in with another huge pick slide and a slow chugging groove of staccato riffage. There are more Metal leanings on this one thanks to Paddy’s lead work and squeals a plenty which help to elevate it and add something else to move to. Gang chants return to “Blood Crop” which has a dark and sinister groove that is reminiscent of 90s Hardcore acts while the siren sounds are perfectly timed. The intensity of the album is a fierce and fiery fury forged in pure hatred.

…Matthi’s rantings continue into “Addicted” which hits like a bare knuckle boxing champion and has a surprise Trivium esq solo that is jaw dropping an very much unexpected during a pummeller of a cut like this one. Think getting hit by a bag of nails and you get the picture. “Table Of Kings” has the boxing bell ring in it’s savage onslaught, blending beatdown groove with some vocal punishment that represents a calling to the pit; Matthi has beef and someone is getting their skull crushed but the bands vicious assault. “The End Of The World” continues that without pausing for breath before “Ballad Of Bullets” brings a change up in the guitars with some Metalcore inspirations and a whirlwind of fills that don’t sound anything like you’ve previously heard. This closing instrumental perhaps show that there is more than meets the eye to Nasty’s straight up Hardcore brutality and that they may have a more complex and less bludgeoning record up their collective sleeves in the future [7/10] 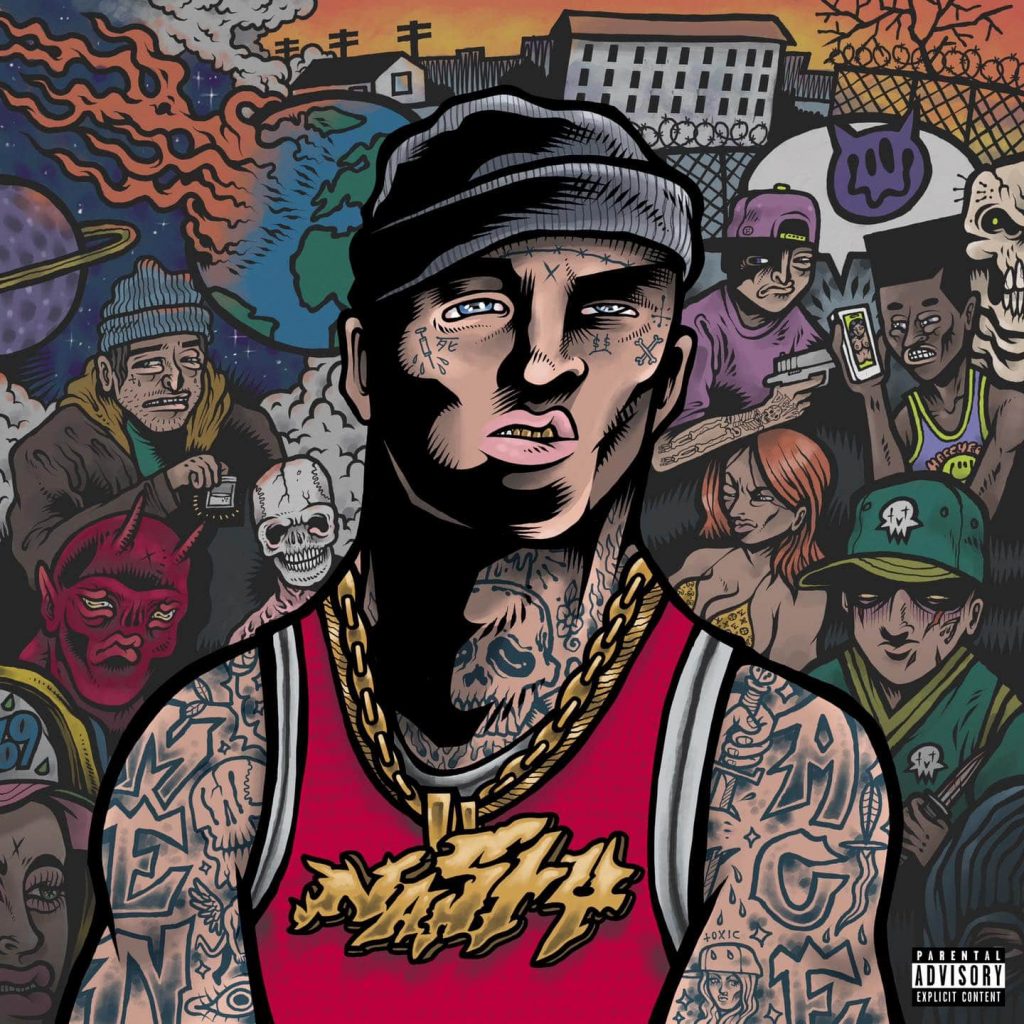