It has been six years since Belgian Melodic Death Metal trio Fragmentum burst onto the scene, their debut album “Pugnacity” receiving the critical acclaim and fan adoration that afforded them the opportunity to be able to tour the US with Children of Bodom as well as share stages with Soulfy and Annihilator in Europe. Taking on a Mayan theme for their sophomore album “Masters Of Perplexity“, they have carried out the entire process of recording, mixing and mastering at their own Z-Underground Studio, leaving nothing to chance or outside influence…

If you’ve never heard any Fragmentum before then their choice of signature sound may leave you some what perplexed; its something of an acquired taste that might take a little getting used to for the uninitiated. Their debut album “Pugnacity” had a kind of flat sounding warm industrial vibe to it with programmed drums and long drawn out unclean vocal passages that created something almost hypnotic; think industrial acts like Spankraght who create music that gravitates around the likes of Quake and Doom and you get the idea. So for their sophomore record, it is those foundations which have been built upon. While in the first record there was some obviously real drumming, this time around the lines between the real and programmed are a lot closer together as if a drum pad has been used rather than a kit to create some of the harsh and almost compressed tones. What grabs you as being immediately different is the Monk like clean vocal parts on “Origination Of Mankind” that burst into the more familiar brutal uncleans and continue into “Prophecy Of The Infinite” which has some almost choral backing moments give the whole thing a certain ethereal quality. “Mountain Of The Dead“, then takes a sharp left turn with moments of acoustic atmospheric brought to life with less prominent haunting synths and dry, raspy vocals that give the cut a tale of old.

The guitar work comes into its own by the middle of the album with “Vision Of The Snake” and “Clash Of The Clans” both having some progressive leanings with more riff before the turn around, although there is a sense that some of the guitar work has been digitally altered to create certain tones and give the music an early 90’s PC game vibe. Whether that’s true or not is something you’d have to ask the band, but it’s like that rumour about DragonForce not being able to play their guitars as fast as they do so speeding it up in the mix. It kind of has to be seen to be believed. Having a bigger bass sound in the mix and a bass drive moment with no guitars “Feast Of The Flesh” is a haunting number with some really interesting rhythm guitar duels while Iron Maiden fans will crack a smile during the “Bring your daughter to the slaughter” lines of “Screechings Of The Sacrifice” which crosses the bands style with some more Traditional Heavy Metal. “Trick Of The Twins” then throws us back headlong into what you might consider the bands core sound, heavy staccato riffs broken and synths broken up by some elongated passages of lead guitar work but nothing virtuoso – don’t expect a whammy bar drop from Fragmentum, it’s not their way. Sounding like a later career Static-X playing Type O Negative covers “Dwelling Of The Ghosts” is one that brings with it plenty of haunting qualities and strangely Gothic overtones despite the Mayan tales within the lyrical fold but the band save the best to last with “Secrets Of The Stones“. Fragmentum can be a challenging listen for those not accustomed to their niche of sound but if you can get past it there is plenty of reward within this record [7/10] 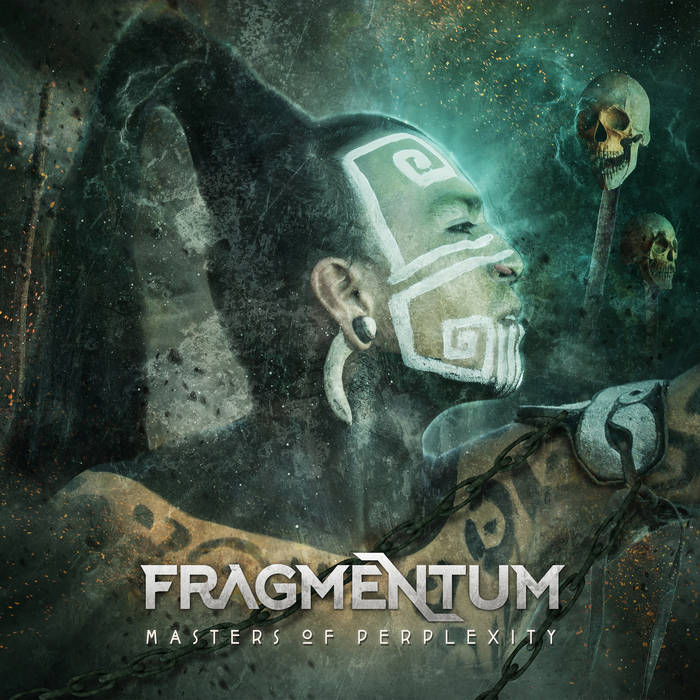