An anonymous quartet cloaked in Monks robes and shrouded in mystery as it is suggested that even their label, Corrupted Flesh Records, do not know the real names or faces of any of the members of the act, Skorb were formed in 2019 and hail from St. Petersburg in Mother Russia. Inspired by bands like Suffocation, Portal, Entombed and Mgla they bring together elements of Death, Black and Doom Metal in forging they own sound in the bowels of hell. As they work upon their first full length record, set for a release in 2022 their debut EP which was recorded between December 2019 and January 2020 at Deaf Enough Studio by Serge Ivanov, who also mixed and mastered sees release…

…using their anonymity to mix all of the colours in their paint palette into six hundred and sixty six shades of black, Skorb have created a trademark sound that is effectively Blackened Death Doom Metal. A headbangable Death Metal groove with throat splitting vocals brings “Feeling Reborn” to life before bursts of oppressive darkness bring Black Metal blast beats into play, crushing skulls and igniting fires; then the Doom Metal element creeps in with Monk like chanting in a voice that sounds like the clean vocals of former Fear Factory frontman Burton C. Bell. The transition between the styles is seamlessly smooth and it has to be to carry it off without a hitch, something that shows craftsmanship and skill that should not go unspoken of. Far from a one off, “Pride of the Lambs” then continues the demonstration but builds in a surprise pair of Crossover Thrash solo into the brutal rumble of jackhammer footwork and blast beats; the whammy bar action in and out being on point. You could argue that it shouldn’t work on paper but the styles are closer together in territory than people give them credit for, the skill is in getting them to sit well together within each track and Skorb have found the formula for that alchemy. Pile driving the ideas home, “Feast During Plague” marries brutal Death Metal vocals with Black Metal guitar work that gallops and rides away like the four horsemen of the apocalypse with a melancholic atmospheric again broken by a brief Crossover Thrash solo. While the prisoner sits in the corner of her cell rocking gently back and forth and whispering to a God who does not answer, the Jailer’s keys are dragging along the cobbled floor as he walks slowly and steadily to the barred gate. Slowly dragging riffs accompany those Monk chant like clean vocals on “Starcorpse” to create a mesmerizing black mass feeling before the nine inch nails are driven into the coffin by a resurgence into Blackened Death Metal and some real ear splitting banshee esq uncleans. After a bleak Doom Metal opening “The Final Ritual” picks up the pace with rampaging Black Metal drum patterns however the aching guitar work continues underneath it all until the vocals kick in and crush everything in the their path with a brutal weight and gravity, as if the Moon crashed into the Earth leaving a God sized crater in the surface as the two were conjoined for the briefest of moments, the glancing blow of a sucker punch that sends you reeling. The spitting, snarling vocals are as caustic as they come, however the use of melody with the guitar work creates a juxtaposition, especially when a more Traditional Metal solo comes forth to enlighten [7.5/10]

“Self Titled” by Skorb will be released on 23rd April 2021 via Corrupted Flesh Records and will be available over at bandcamp. 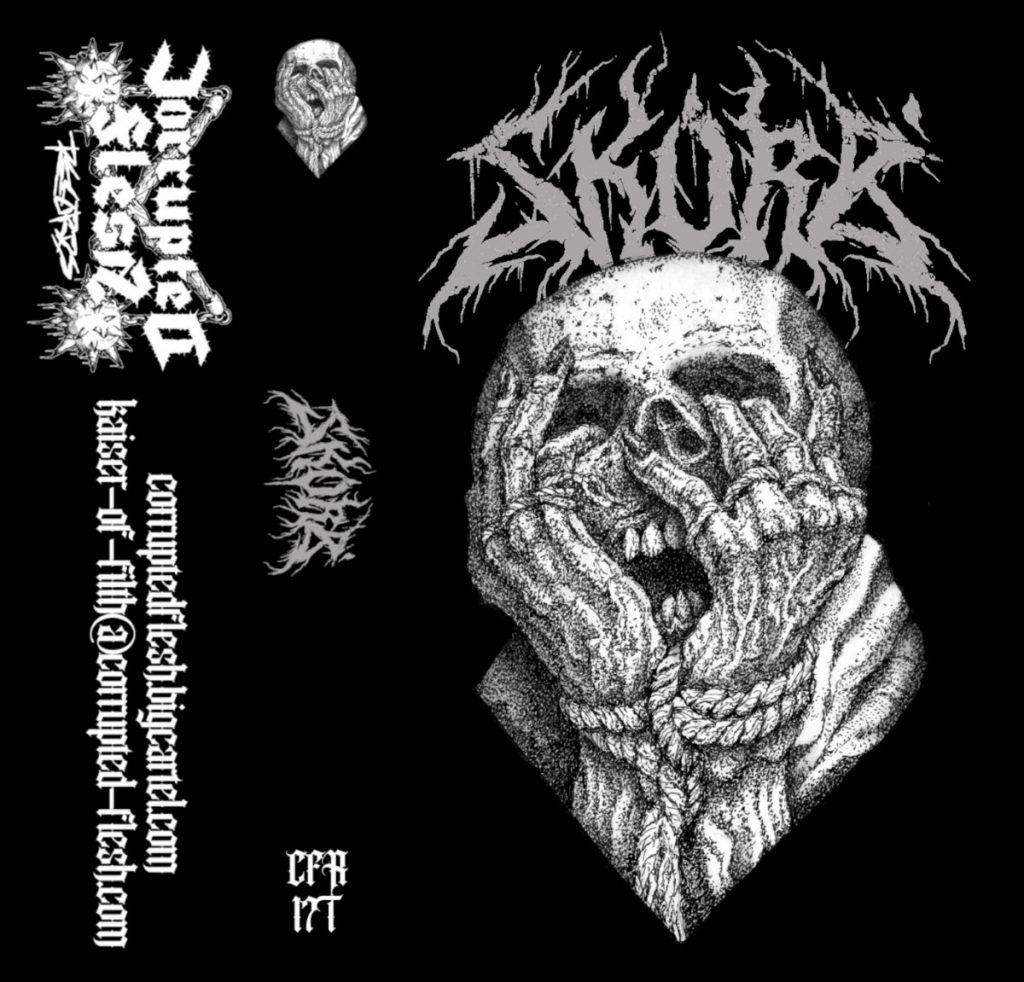