Berlin Germany based Thrash infused Death Metal quartet Bloodbeat steamrollered their way into our path with their 2016 offering “Murderous Art“, an album rich in 90’s Death Metal nostalgia as well as its own character. A plethora of recognizable riffs give their debut an instant appeal with their audible influences in the likes of Napalm Death and Slayer formulating the foundation of their sound. This time around they’ve inked a deal with Inverse Records which has enabled them to record with Marc Wüstenhagen (War From A Harlots Mouth, Postmortem, Risk It!) at Dailyhero Recordings Berlin, who also mixed before mastering was entrusted to Gunnar Refardt…

…the rampage continues with “Creative Murder” which is a Molotov Cocktail of an opener, the rag soaked in American 90’s Death Metal and lit by vocalist and guitarist Jason Kuhn’s tales of the atrocities and abysses of humanity, the notable Tom Araya esq roars into the final verse being a particularly choice tip of the hat to one of the great vocalists in the genre. Kuhn’s vocals however are more reminiscent of someone like Max Cavalera, with a distinctive tone that rattles around your brain like a bullet ricochet, brutal while being clean enough to understand every word of the lyrics. “Beyond the Skeletons” throws down the gauntlet with a ripper of a Thrash style whammy bar solo before the Thrash grooves of “Pulse” introduce some more technical chord progressions before breaking back into a post solo onslaught of pure Death Metal aggression. Each of those opening tracks reverts to a tempo that is the Bloodbeat groove; its not a formula as such, but a level where the band sit naturally in performance. Then you have the joys of the leads in “No Control” which are really good fun, especially when accompanied by the subtle yet brutal attacks from drummer Paul Hopp, who uses his skills to bring not only percussive battery but high rate extinction. He has the ability to turn up the energy and heat with sudden change ups and some of the blast beat moments that break up the gallop of the material are so perfectly executed, you’d think he was in Black Metal. That in turn lends itself to the band increase the intensity of the cuts to balance it out, something they carry off masterfully. Sonically cuts like “Intention to Kill” sound like Soulfly playing a Skeletal Remains cover; separated from the Wolf Pack by the extended solo par excellence from Daniel Dokic and another headbangers delight in an album written to snap necks. The problem is that as fun as all the tales of the dark side of humanity, driven riffage and pounding percussive battery is, the album suffers from a lack of variety; in isolation each track sounds phenomenal but together as a collection, it cries out for a haunting introduction piece or a more monolithic slower cut to break up the slab after concrete slab of similar tempo cuts, which ultimately plays against its longevity. That being said, the saving grace is therefore the album length; at eight tracks you don’t have to take the following day off work to recover from a sore neck. It’s a fine line which separates Bloodbeat from nailing the perfect Death Thrash combo and they’re not far away [7/10]

“Process of Extinction” by Bloodbeat is out 18th June 2021 via Inverse Records and is available over at bandcamp. 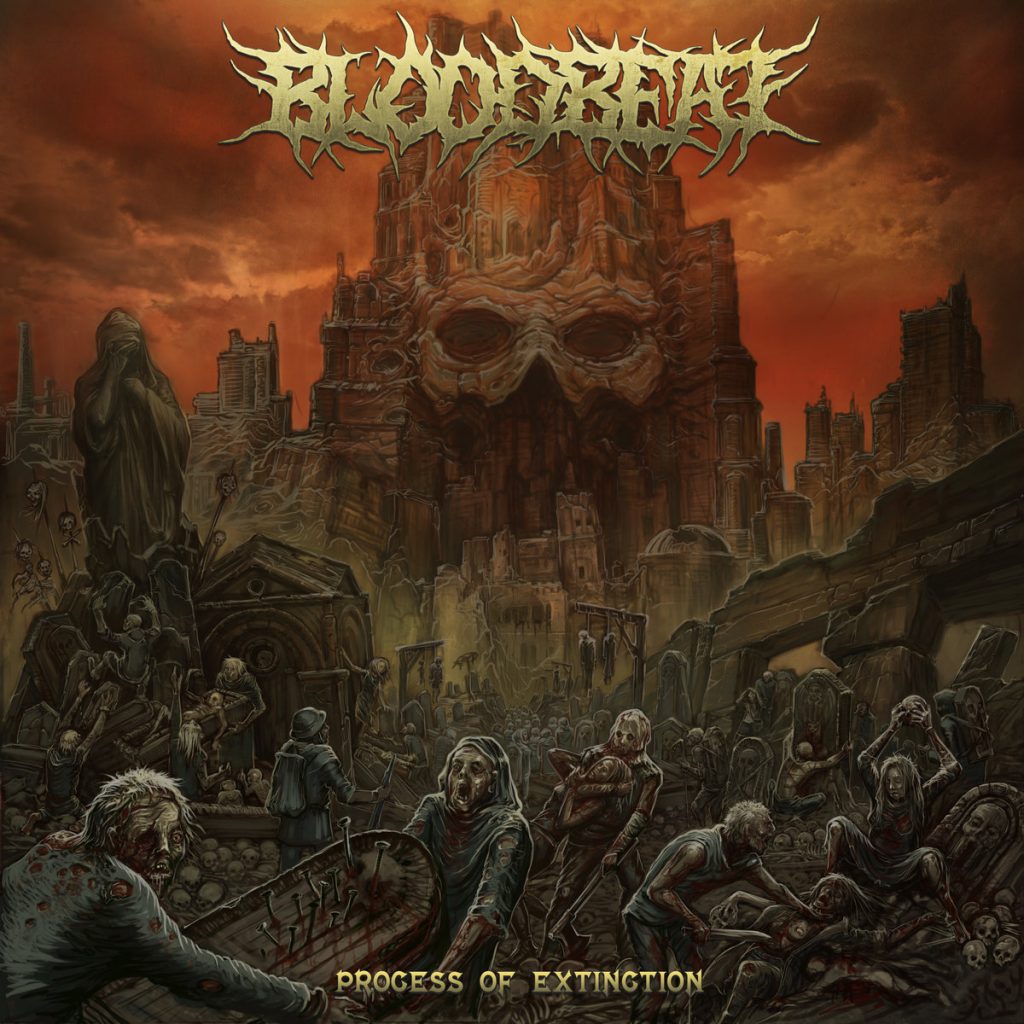