The poster for tonight’s show may have the conjoined twins of Replacer frontman Barney Warner and Bound In Fear vocalist parading in their disguise as Greezercore side project Pintglass but at the 11th hour a couple of cases of the Great Plague in their camp means they are absent without leave. But as Freddy Mercury once sang, the show must go on and tonight we have the delights of Weaponry, Diabolus and Cage Fight on the bill as we review our first live show proper since we saw Weaponry, Transients, Arimea and Gutlocker in Oxford in March 2020. Oh the irony.

Contrary to the word of Weaponry frontman Al Bristow, Alton in Hampshire is not named after him and did exist prior to 1985, however the market town has a good bit of the Reading Alternative Metal collective’s history stamped on it. The first time they played a show there they had Liam Dearing of Awaking Savannah fame gracing the drum stool and filling in for their regular squeeze. The second time due to logistical issues, the band had to go to plan B and the drum machine was used due to London traffic. The third time, well that’s tonight so they have completed their reward card stamps for the Lounge Bar and earned themselves a free drink at the bar. All of that means that drummer Tim Doyle is making his venue debut behind the kit, which just so happens to be a backline one provided by Cage Fight due to the venues stage size. The band take to the stage as a four piece with rhythm guitarist Dan Ashworth absent without leave, however his son Max Ashworth plays both rhythm and partial lead sections in style proving the band can not only survive but thrive without. All that is missing is a virtuoso solo moment to bring the house down during a set finale of extended riffage after vocalist Bristow exits stage left after a mic drop after the last of his work. Having already played shows since venues re-opened, Weaponry have already blown away any cobwebs they might have had and return to what they do best tonight with cuts like “Something I Lack” and “Moving To Andromeda” getting the audience going with Bristow’s usual theatrics seeing him stalk in front of the stage and getting up and down on Flappy Steppy, the bands now trademark step ladder as well as rolling around on the floor like a man in need of an exorcism. Fortunately his band mates are never distracted by all that jazz and instead bring the noise to support it in the form of plentiful Deftones meets name-your-favourite Post-Hardcore band riffs for another high octane performance and even have time to include a new song mid-set that bodes well for a rumoured in the works EP [8.5/10]

Hampshire Deathcore brutes Diabolus have been through a plethora of line up changes over the years but remain very much a force to be reckoned with as a powerhouse quartet who take influence from the likes of The Acacia Strain and Loathe. They would have been the heaviest band on the bill even with Pintglass with plenty of Death Metal moments integrated into their sound which gives them an Adamantium enhanced skeleton with which to lay the crowd to waste. By their own admission they had a tough time in 2019 with the absence of a drummer providing something of a mental block but have since risen like a phoenix from the ashes supporting Black Tongue and dropping ferocious new cuts in “Razorbirth” and “Validation Cvlt“. What makes these Gentlemen a great watch is their play with tempo changes as they go from the sublime to the rediculous with blast beats and groove sweeping into Downtempo destruction with staccato riffs and brutal breakdowns. Their use of samples to build an eerie oppressive atmosphere would work better in a dimly lit venue with a light show but still adds a shroud of darkness tonight as vocalist and former guitarist Edd Kerton stalks the territory between the stage and the audience like tonight was a floor show, somehow skillfully avoiding the sweaty pools left by Weaponry [8/10]

Promoted to headlining act almost by default,  tonight actually marks the live debut of Cage Fight in front of an audience as the Metallic Hardcore quartet have only previously appeared live as part of Metal Injection’s Slay At Home live series. For those not in the know, the quartet feature in their ranks TesseracT guitarist James Monteith who wears an Ironed Out t-shirt tonight and brings some blistering Hardcore injected Punk riffs to the table, as this project is as far from the Progressive Metal beast of his day band as you could get while still being Metal. They smash through vicious cuts like “Hope Castrated” and “The Mirror Shattered” with vocalist Rachel Aspe reminding of Candace Kucsulain from Walls Of Jericho with a brutal larynx threatening vocal performance and when she announces “this one goes out to anyone who ever sent me a d*** pic!” it cracks a smile. Cage Fight are without a doubt a going places band with a bright future, their tight rhythm section gives Monteith plenty of room to express himself and they all look very happy to be heard. They have an album in the works and if all the material on show tonight in on that record, it’s going to be an absolute banger [8.5/10] 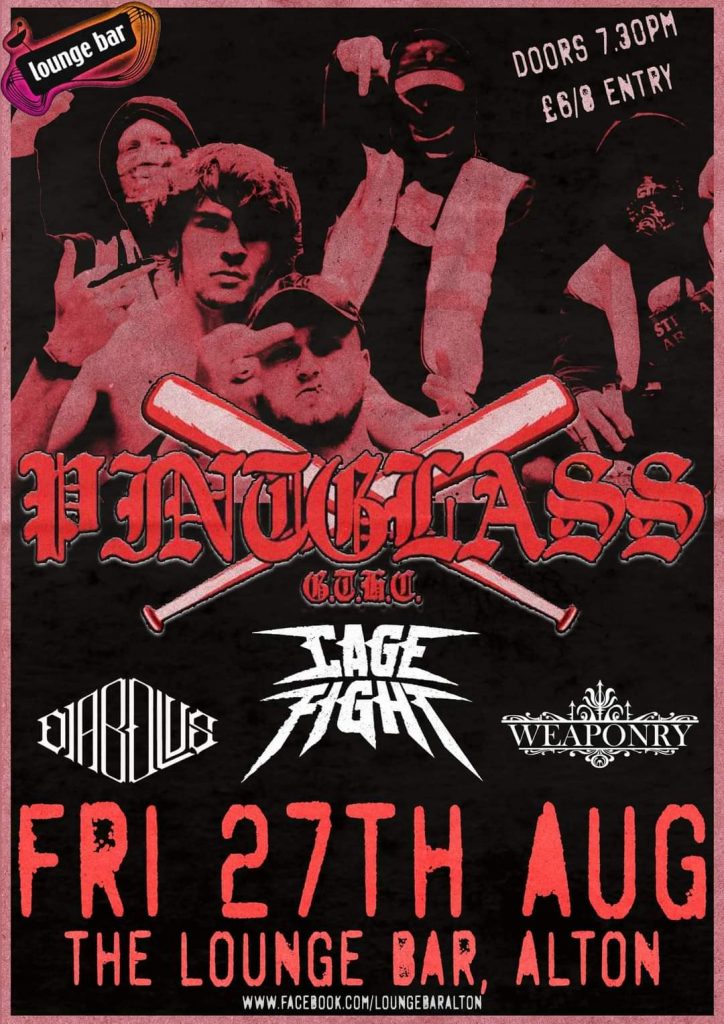