Skip to content
HomeReviewReview: “Concealment” by Knowledge Through Suffering

Italian Blackend Death-Doom Metal project Knowledge Through Suffering are slowly making a name for themselves by joining a hoard of bands who are seeking to bring something from what many consider to be a Golden era in 90’s Death Metal influence to their sound. Combining that with dissonant and demonic possession Black Metal to create an oppressive, suffocating and otherworldly experience they play on lyrics that deal with the esoteric notion of God’s disappointment for his own act of creation from which a bitter, black and twisted poison vine shall grow as the skies darken overhead…

…Who K.T.S. actually are remains shrouded in mystery despite an EP in “Teeth and Claws” released in 2020 and could even be a solo project as just one member is pictured in a limited amount of social media output. However is that really important? All that really matters is if the material is any good or not and  time out with three brutal sonic excursions totalling the better part of 31 minutes, there are shorter albums. Dark, brooding atmospheres with bone crushing riffs take us to places where demons fear to treat for “God Alone was Exalted on that Day“. The guitar tone is dirge laden and brings with it the essence of Sludge Metal but the caustic vocals are on an entirely different plane of existence. Somehow, dispite all the odds, the lyrics remain distinguishable as the storyline unfurls like the wings of a fire breathing beast about to take to flight. What K.T.S. have done with these sonic monstrosities is clever. They’ve created movements with each cut in the same way that classical or progressive music does so while you have moments that sound like Incarnation playing EyeHateGod covers you also have moments of furious Behemoth style Black Metal. “Let the Earth Sprout” goes to another level of putrid disgust for Humanity from God himself as the vocals destroy everything in their path like a plague wind of locust as the lyrics call for the destruction of every living thing on the planet. There are spoken word moments across these tracks that sound like a possessed man of the cloth screaming at a congregation to do his bidding and by the time the one in “Of Flesh” appears, the onslaught has become a total Twitch of the Death Nerve esq attack of bowl splitting vocals and furious blast beats echoing the wrath of the unmerciful God they depict. This album burns like the ground beside a lava flow, sending plumes of black smoke into the sky… [7.5/10] 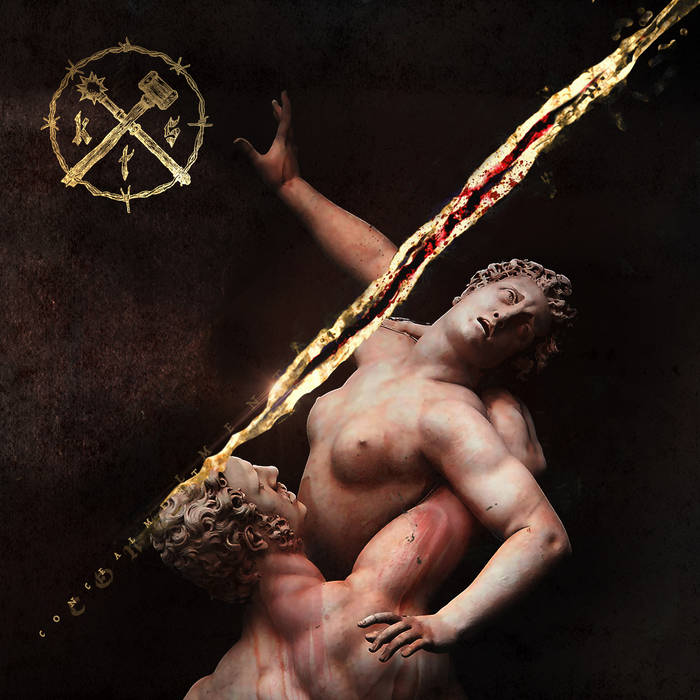