Skip to content
HomeReviewReview: “A Tear In The Fabric Of Life” by Knocked Loose

“It’s a story about extreme grief and the levels a person is willing to go through to get rid of it. The story follows a main character through a traumatic car crash late one night in the woods that leaves his partner deceased, and from there you spiral with him into the depression and guilt that comes with being the cause of something so detrimental. This is the first time we really dove in and tried to create something sonically that evokes a different range of emotions and over all something that introduces tension and anxiety with a massive pay off. The story is told not only through words but through the music as well, which proved to be our biggest challenge in writing. Lyrically this story ended up being much more personal than we initially intended. We started with the idea to tell a fictional story but throughout the process, I found ways to incorporate real feelings of loss and mourning, as well as anger and self doubt. I’ve always been a very personal writer and this was originally a step away from that, into something more artistic. But in the end, it was just as therapeutic as writing a regular Knocked Loose record, and I think you’ll be able to hear that” ~ Bryan Garris

Returning to producer by Will Putney (Body Count, Every Time I Die, Fit For An Autopsy) who handled duties on their 2019 sophomore album “A Different Shade Of Blue” was a no brainer for Oldham Kentucky Metallic Hardcore crew Knocked Loose, he’s one of the best in the business and having him on board is like the stamp of approval that provides long time fans peace of mind. Leaving behind them a trail of destruction since 2013 for a hard touring band usually means a certain inevitability about line up changes and after five years at the coal face, rhythm guitarist Cole Crutchfield has existed stage left to be replaced by Nicko Calderon, “A Tear In The Fabric Of Life” being his first involvement in the studio with the band. As you might expect, from the very start of “Where Light Divides the Holler“, razor sharp riffs and bone snapping breakdowns reign down upon your skull but as Bryan Garris so eloquently put it, this is a far more arty piece of work than the band have created before. The tracks are littered with nuances that embellish the music, moments of haunting synth, flesh ripping squeals, dark spoken word and some bowel scraping guttural lows, each one building on the previous one to create a harrowing horror story soundscape that floats around the bands Metallic Hardcore sound.

“God Knows” sees some shriller Death Metal vocal moments that are pure unadulterated evil as the breakdowns pile up like pancake stacks for mosh pits to get messy with blood, sweat and tears when it gets set off live. Staccato riff barrages take centre stage in “Forced To Stay” as haunting, off kilter leads play in the space between them while Kevin ‘Pacsun’ Kaine delivers a thunderous performance on the kit but its the more emotive and raw tinges in Bryan Garris’s vocal performance that have opened a whole new dimension for the band. While the lyrics were often introspective previously, this time around its as if there is something deeper underneath the story that is told and that gives everything that certain black shine that lingers well after your ears have stopped ringing from the sonic bombardment. There is no doubting that this EP represents Knocked Loose at their heaviest as well as at their darkest, hard hitting lyrics and harder hitting guitars chug with a frantic energy that matches the schizophrenic lyrical flow and by the time “Permanent” concludes you can’t help but look at this with awe. At 21 minutes it doesn’t outstay its welcome but it does leave you wanting more despite sounding complete. If this is new direction for Knocked Loose, then all we could possibly ask is for more [9/10] 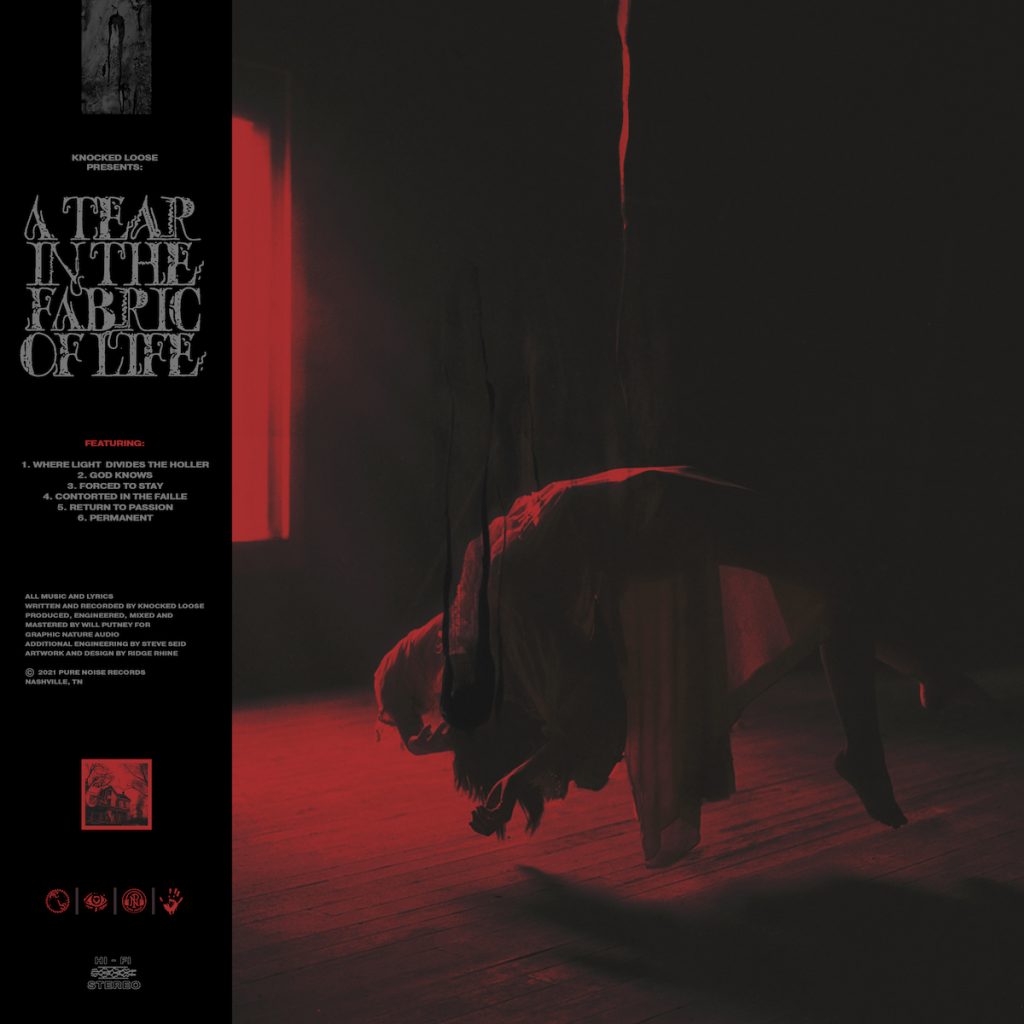