What could be better than 20 Questions? Almost Full band 20 Questions! So here’s the latest incarnation of the interview series with Kingseeker vocalist Jan M. A. Opsahl, guitarist Aaron Veliz and multi instrumentalist and producer Emil Bringsli as the Oslo Norway based outfit celebrate the release of their debut album “Daily Reminders“.

Aaron: My poison would be Jack & Coke, 3 days of sleep deprivation writing new bangers, fueled by Monster Energy drinks and Speed, cause thats the best way to deal with my mental illness.

Jan: I bite my nails a lot. And I use my fidget spinner all the time.

Aaron: My habits are just trying to make it out of bed everyday, getting a smoke, coffee and/or Monster, and then get some spicy food for breakfast while binge watching something on YouTube / Netflix, or play some video games until I get an idea for a riff or new song, while also practicing on our songs

Emil: I let random youtube videos blast over my bluetooth speakers, while I do random shit around the house.

3. What made you bring and end to Murder The Traitor in 2017 to form a new band with Emil Bringsli?

Aron: Murder The Traitor ended when me and Emil decided to work together, Emil thought the name was kind of cringe and wanted something less “3edgy5me”. We went to Coastlines, which turned out to be a very common name, then Emil suggested “Kingseeker” after ,

and everyone stuck with it. Technically it’s the same band, but with a different name, the only member left from “Murder The Traitor” is Aron.

4. Originally your project was called Coastlines; what made you change your name to Kingseeker?

Jan: In Norway (and probably every other country for that matter) we have facebook groups where musicians hook up. One day there was a country band named “Coastline” looking for members. Thats when we said “Yeah fuck this, lets go with the serpent from Dark Souls’ title”.

Aaron: reasons were that there were a few other bands also called Coastlines, so we thought it would be better to get a new name that wasn’t taken, to maximize and bring less confusion, PS: the name is an NPC in the first Dark Souls game, which Emil came up with as an cool name to use, that had to do with this videogame franchise, which we play together recently

Jan: For me, it was definitely recording the album, and working on the songs together. I feel like we really got a really really good collaborative strategy going, which makes it easier to make songs.

Aaron: Finishing the album which has been a very tough journey, but a lot of good times with the boys, and also I finished up next release, an EP being called Grief, which was supposed to be this album, but I put it on wait, since we found Jan and wanted to see how we worked together on the writing process, since Grief is my personal concept album (EP) but it turned out to become a lot better than expected because what I’ve learned by finishing Daily Reminders, also it was written on a 3-4 days long binge on Speed, with no food, nor sleep, where I wrote everything by myself, but with minor tweaks during the Pre-Production

Jan: Finally playing shows, with a full line-up with an actual drummer.

Aaron: Playing a few venues again, hoping for the moshpits, and crowd killer hardcore dudes messing up, it’s gonna be a good time, and beers with the boys

7. How intense are your band rehearsals?

Jan: I’d say they’re pretty mellow. There are some hijinx, but not a lot. We’re pretty boring “rehearsers”, I’d say.

Aaron: At this moment not much. we recently got a new drummer, so we just have to work out the kinks, then it’s full on practice mode.

Emil: We focus on the task at hand, not very intense, were chill dudes.

8. When times get rough, what are you screaming along to on your headset?

Emil: Get out alive by Three Days Grace.

9. For the album “Daily Reminders” you brought in a trio of guest vocalists in Robbe Madsen of Halcyon Days, Ivan Hansen of Frostbitt and Daniel Hesby Hansen. If you’re all sitting around a campfire and having a few beers, which one is getting the marshmallows, which one is breaking out the acoustic guitar and which one is out drinking every one else?

Jan: This question is hard for some reason, Ivan would for sure bring the guitar, i think Daniel would bring the marshmallows and Robbe would outdrink us all.

Aaron; I know Robbe goes pretty hard, but I see him as a marshmellow guy, Ivan would bring out the guitar, since he haven’t held his liquor very well at the parties I’ve seen him in, but he has a very good time nonetheless, so Daniel would drink them under the table.

10. If life is a box of chocolates, which one are you eating first?

Jan: Salty caramel all the way!

Aaron: The ones that looks the fanciest or the ones others don’t touch

Emil: The one that doesn’t make me feel disappointed and violated i.e Liquor chocolates.

Jan: I have a drink, and sit down to breathe out.

Aaron: Jack & Coke, and Super Spicy Shishkebab with the boys, Party time I guess, then a wank later on

Emil: I eat, I drink beer and sleep.

12. What has been the strangest moment Kingseeker have experienced?

Jan: We got a Kebab shop in Oslo to draw a penis on the outside of our order once.

Aaron: Haven’t had many strange things happening yet, but I was pretty scared the other day when Emil and I was driving on the highway, and he put the car in free-gear, and told me: “Do you feel like life is just meaningless?” Haha

Emil; During the recording sessions for Daily Reminders, there was this one dude, who walked to us, when we were having a break, and kept asking for water

13. If you see a Gorilla riding a Rhino down the road in front of you, are you following to see what all the fuss is about?

Aaron: Who wouldn’t want to see what is going on? Like, what are the odds right ? Sounds to me like a good time

Emil: I’d jump on top, to ride the gorilla riding the rhino.

14. If you could go back 5 years and give a nugget of knowledge to your younger self, what would you say?

Jan: Go more outside, be more social, be more thankful for the time and opportunities you have to spend with your older brother.

15. Pizza and beer is a sensational award winning combination so what are your favorites?

Aaron: Coca Cola and Shishkebab, or Monster and Nachos

16. If someone asks you what Metal is, what would you say?

Jan: Metal is a way to get your anger and frustration out in a productive, safe and cathartic way.

Aaron: The only kind of music to cure hardship, mental illness and give you a perfect outlet, the heavier the music, the better it will cure your problems

Emil: Metal is a solid material which is typically hard, shiny, malleable, fusible, and ductile, with good electrical and thermal conductivity (e.g. iron, gold, silver, and aluminium, and alloys such as steel)

17. As a band who knows the scene and has played with a lot of other bands in all genres of Metal, who would you predict a bright future for?

Emil: and us, DUH

18. What’s your favorite venue to play?

Jan: Small venue, you can fuck up as much as you want and noone will notice, cause they’re too occupied with having a good time.

Aaron: I haven’t got any yet up to this point, but playing Bloodstock, Wacken, Rockefeller, and my favorite venue in the UK, Underworld Camden, At World’s End Bar in London would be the one for me

19. What would mean more to you as a band, a huge one off festival appearance at Bloodstock (United Kingdom), Wacken (Germany) or Hellfest (France) or a 20 date European tour supporting opening for a band like We Came As Romans or Polaris?

Jan: For us I think the 20 date tour would give us the most leeway to get more fans and our name out there. It’s easier to meet many people across 20 venues than what, like 85k people at one festival.

Aaron: I would love a festival, but tours give us more funny and memorable moments, meeting new people, and gives us the most exposure for sure

Emil: A tour is a journey and an experience. You gain so much more from doing a tour.

20. Who would you thank in your Grammy Award winning speech?

Jan: All of my family, the guys from the first band I ever was in (they’re the reason I’m yelling loudly in a band today). those i grew up with, my bandmates and those who cared enough to listen to our music.

Aaron: Emil for picking me up and giving me the chance to better my strengths, and the boys, always the boys, and also to those who has been supportive of us, and Vaterland for making great pizza, Lett & Mett for sick Kebabs, and All the animals around our sessions for being absolutely cute AF

Emil: My mother, my girlfriend, and everyone that said i couldn’t do this.

“Daily Reminders” by Kingseeker was released on 21st January 2022 and is available over at bandcamp. 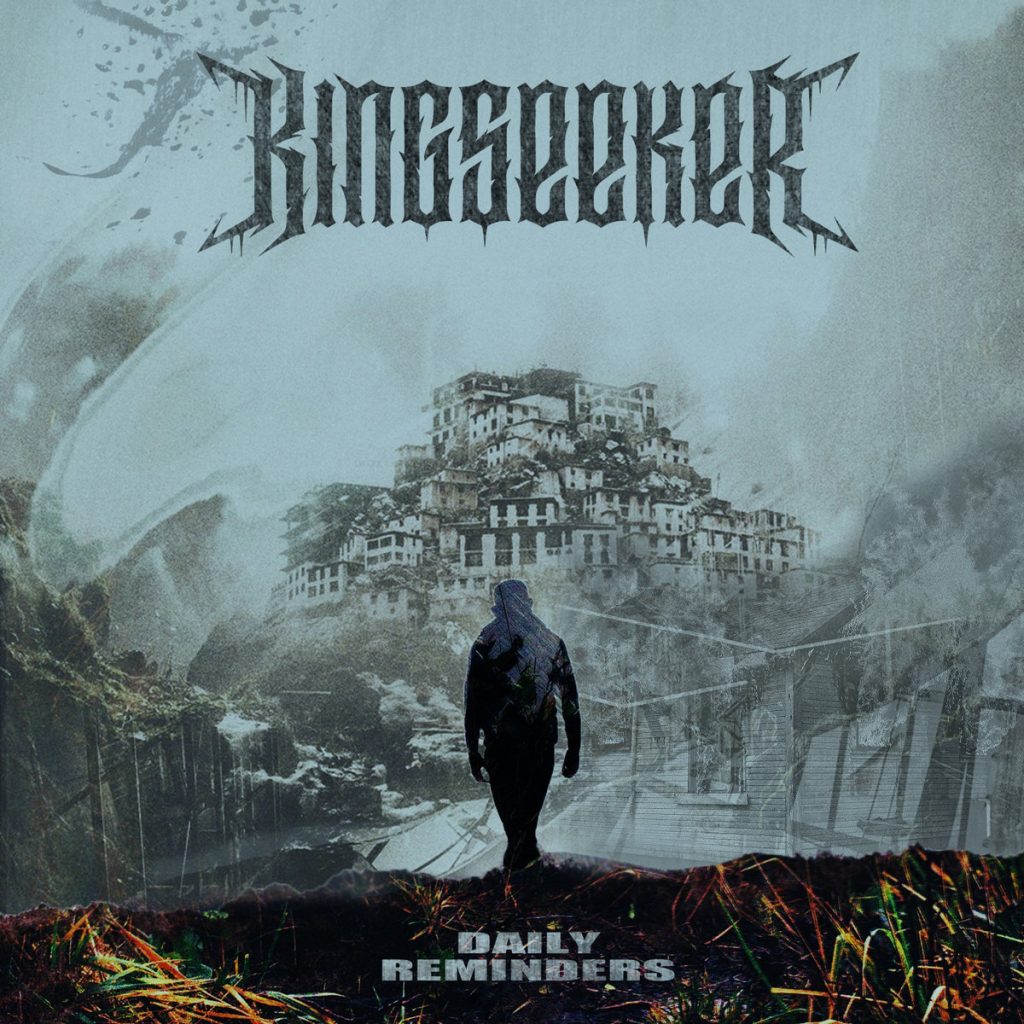