“The words “Forever Nothing” originated in one of our earlier tracks Moving To Andromeda. It’s a tongue-in-cheek phrase we like to say to each other when we think we might be getting too big for our boots. We are forever nothing. Even if we end up playing Wembley Arena, there’s still Wembley Stadium. So when we play to a sold out crowd of 150 people, “Forever Nothing” is a reminder that it could very easily be 2 fans and the sound guy.” ~ Al Bristow

Having spent a week in the studio last September with Reading Post Hardcore quartet and specialists in cynical sad songs with happy endings Weaponry as they recorded “Forever Nothing” at The Ranch Production House with Producer Daly George (Creeper, Milk Teeth, Boston Manor) you might think that we had the inside track on what the final record would sound like. But the truth is that in the studio it’s all about each musician getting into the zone and laying down their parts of each song separately with the band and the producer sharing a vision of what the final product will sound like based on the demos that the band initially provide with small changes and variations being tried and tested as they go. So in a round about kind of way what we’re saying is that, before writing this review, while we’ve heard the singles and the bands subsequent live performances of some of these songs, notably at Oxfords Rabidfest and Reading Rising Festival, we haven’t actually heard the EP in its full, final, mixed and mastered form. That is something that might strike you as being strange, but it’s God’s honest truth.

As a band Weaponry have made their name with their live performances and in the past all their songs tried, tested and tweaked in the live arena long before being committed to tape. But with “Forever Nothing“, an EP which features a trio of cuts that mark the bands first writings with drummer Tim Doyle gracing the kit, that is uniquely not so with only opening cut “Take It Or Leave It” falling into that bracket. The other unique thing about the record is that it is the bands first foray as a quartet with vocalist Al Bristow recording the rhythm guitar parts in the studio to allow guitarist Rivers Ashworth to focus on the leads and relieve some of the pressure. Listening to the songs back now in their final form, everything has come together at the hands of Daly George with the band and producer going together like a glove on a hand on a cold day. The understanding of what the band wanted to achieve from the outset being magnified and enhanced by the qualities that George brings allowing these four songs to reach their full potential, something which was heard from the raw demos recorded on a smart phone in the centre of a rehearsal room to give him an idea of what they had.

The mid tempo stomp of “Take It or Leave It” has been enhanced by the Rivers leads which build on the foundation of a solid main riff and almost tribal drum fills as the band have managed to capture the energy of their live performances of the song like lightening in a bottle for the studio rendition. Those small nuanced leads add a charm, chime and of all things a chink of light to what is otherwise a darker cut, the darkness coming over far more here without the live atmosphere. The earworm riff of “Please Enjoy the Show” marks the first of the new material and opens Pandora’s box to what the band in their refined form as a quartet. As with a lot of later writings in a bands lifecycle the extremes have begun to push out with a gloriously dark melody in the lead guitars as Al Bristow screams his lungs out about anxiety before a powerhouse heavy breakdown section that is swept over by another stunning lead. One that takes the bands melodic endeavours and combines it with arguably their heaviest moment to date, it sees them creating Post-Hardcore at its finest while also crossing into more Metallic sub-genres with style, grace and panache. This isn’t simply music, it’s very much art as well.

Lyrical darkness continues with “Mine” as Bristow screams about the call from the void while at the same time there is life affirming quality as the line “if you’re hanging by a thread, you’re still attached“, a line which resonates with anyone who has suffered at the bands of anxiety or depression. The qualities of Weaponry’s powerhouse rhythm section of bassist Jay Rozentals and drummer Tim Doyle shouldn’t be underestimated as they provide the backbone, the spine on which everything else rests in perfect harmony. Vocally the most challenging of these cuts is perhaps it’s finest moment with “My Name is Glory” a cut that proves just how far Weaponry have come in their time. It’s the kind of anthem that gets into your head and never leaves, the easily hummable earworm main riff and sing-a-long-able chorus creating that deserves and demands the band play it on bigger stages in larger venues. The musicianship on the final three tracks in particular is evidence that time spent together in the rehearsal space and playing together live has been time well spent at the grindstone because as a unit they’ve become tighter and tougher, refining their sound to take them from a diamond in the rough to the finished article. Weaponry have always created anthems with raw lyrical content and “Forever Nothing” is no different, covering topics such as homelessness, isolation and anxiety from real life experiences. The difference with this is that sonically they have taken the next step in their evolution and they sound better than ever [9/10]

1. Take It or Leave It
2. Please Enjoy the Show
3. Mine
4. My Name is Glory
“Forever Nothing” by Weaponry is out 17th June 2022 via Prank Monkey Records and is available over at bandcamp. 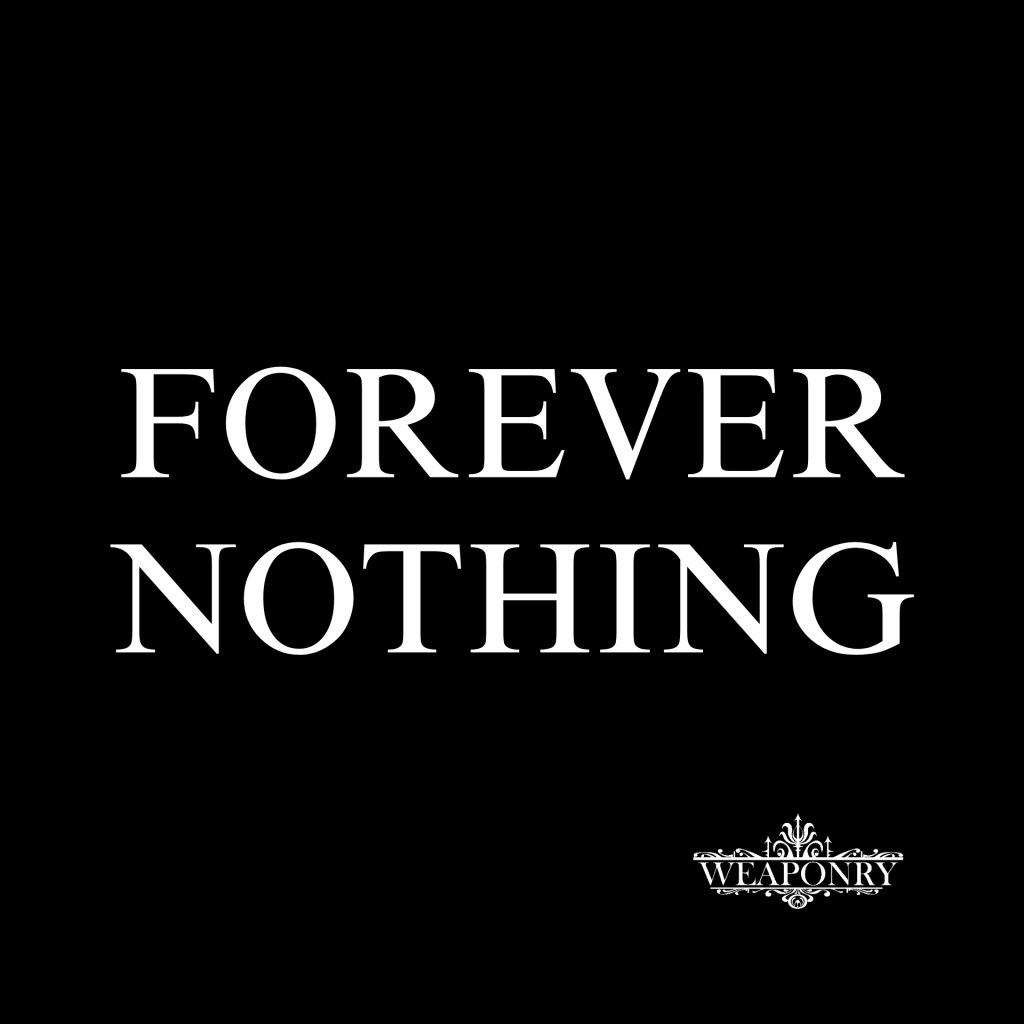 Tags:Forever Nothing, Prank Monkey Records, Weaponry, What Have We Done