Skip to content
HomeReviewReview: “Vanguards of Misrule” by Defiant

“Vanguards of Misrule celebrates and encompasses everything that Defiant is over the last 17 years of its turbulent existence and shapes the future of the things to come. It is our most focused work yet and a classic example of an EP with a strength of a full length. Definitely our most complex material so far that will not leave anyone indifferent. And a good introduction to what follows next.” ~ Defiant

What comes next is an album titled “Mammon Mantra” scheduled to be recorded in 2023 and said to have a number of special guest appearances, but for now dedicated to LG Petrov from Entombed, “Vanguards of Misrule” marks the seventh sin of Croatian Blackened Death Metal act Defiant. They caught our attention with 2015’s “Morbid Spiritual Illness” and 2018’s “Insurrection Icon“, both of which found the band dabbling in Melodic Death Metal, however era of the band however is said to be over with the decision to purify, refine and focus on their darker desires evidenced on 2020’s split release with Hungarian’s Dvvad titled “Ways ov Damnation“…

Perfectly introduced by the classic quote “You think that when you die, you go to Heaven. You come to us!” from Angus Scrimm as The Tall Man in 1988’s “Phantasm II“, the gates of hell are opened with “Dii Inferi“, a cut soaked in blast beats and vocal savagery that charges head first into traffic from the very start. The surprise in this one comes in the form of some off kilter nuances that bleed out mid track, intricate little bass melodies that offer a chink of light through the black clouds of the bands onslaught. It’s tastefully done and a trick repeated in the title track which also finds the band dabbling in tribal drum fills between the relentless blasting giving the band an entirely new dynamic as they are no longer solely reliant on all out destructive power. The face melting solo is also neatly constructed, offering a little melancholy, steering clear of the flamboyant over indulgence and instead providing a route to remain with a solid hammer strike to the skull. Variety is the spice of life and “Contra Omnes” has a couple of Thrash influenced riff bridge sections before an almost psychedelic eerie ambient break lead by the bass builds into a solo. It may mean that purists shudder and turn in their graves but the avant-garde moment is one that adds spark and curiosity rather than subterfuge to this burnt offering. Spoken word moments intrude on “Expulsion of the Triumphant Beast” which has a classic buzz saw solo as it combines Black Metal and Death Metal in perfect alchemy, all that is missing is the sound of cackling as the fire burns in the closing sections but the razor sharp riffs are all that is needed to incite violence. A cover of the classic “Dawnrazor” by Fields of the Nephilim bookends this EP in style, this rendition very much in keeping with the feeling of the record as a whole while bravely using the Gothic vocal overtones of the original to fuel the fire. What Defiant have done with their version is condense and refine the track, making it a leaner, meaner affair with little more bite and that is something that works very well. Make no mistake, LG Petrov would be honoured by Defiant dedicating this record to his memory [8/10]

“Vanguards of Misrule” by Defiant is out 26th June 2022 and you can find out more over at bandcamp. 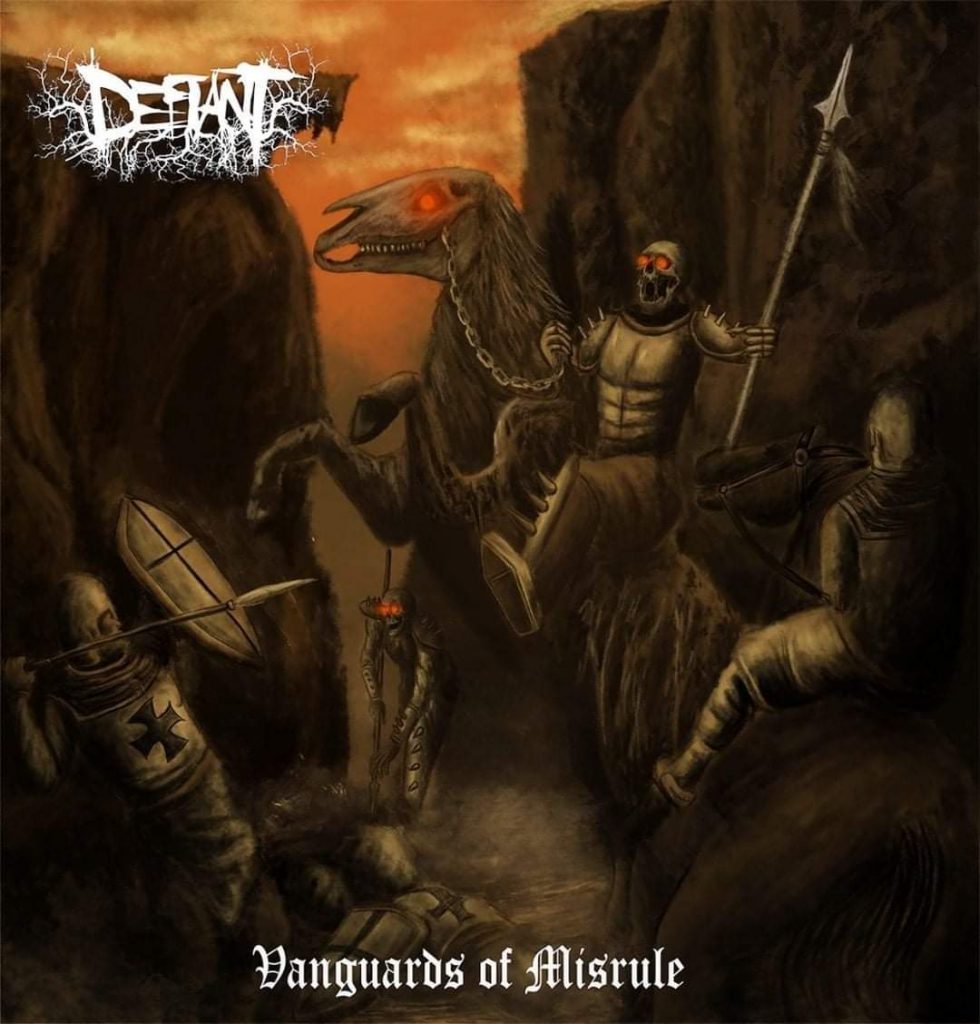