Skip to content
HomeReviewReview: “Of Kingdom And Crown” by Machine Head

A lot has happened in the World of Oakland Californians Machine Head in the four years since 2018’s “Catharsis“, the final studio album to feature drummer Dave McClain and guitarist Phil Demmel, one that drew mixed and negative reviews that with both men stating that the group had become a Robb Flynn solo project towards the end of their time. After extensive touring including the 25th Anniversary of the seminal “Burn My Eyes” album, the band now consists of Robb Flynn (lead vocals, lead guitars), Jared MacEachern (bass, vocals), Wacław Kiełtyka of Decapitated (lead guitars) and Matt Alston of Devilment (drums). Here however drummer Navene Koperweis (Entheos, Whitechapel, Animals As Leaders) was behind the kit as a session drummer for reasons unknown as the band recorded album number 10 with producer Zach Ohren before mixing by Colin Richardson (Trivium, Fear Factory) and mastering by Ted Jensen (Underoath, Gojira). So how do you follow a deeply personal album that suffered so much in the public eye? You challenge yourself to write the notoriously difficult concept album.

“Of Kingdom And Crown” is loosely based on Attack on Titan, a Japanese dark fantasy anime television series adapted from the manga of the same name by Hajime Isayama and finds Robb Flynn re-writing the protagonists of his story as anti-heroes as he explains: “The concept is set in a futuristic wasteland where the sky is always crimson red, and it’s based around two characters. Character number one is named Ares [pronounced Aries], and he loses the love of his life, Amethyst, and goes on a murderous rampage against the people who killed her. Character number two is Eros [pronounced Arrows], who loses his mother to a drug overdose and, in his downward spiral, depression, becomes radicalized by this charismatic leader and goes on his own killing spree and is one of the people who killed Amethyst. And so the lyrics detail how their lives intertwine”

Let’s make no bones about it, Machine Head have always been a band to thrive in adversity and rise like a pheonix from the ashes of near oblivion when experiments backfire or circumstances turn against them and we only need to look at what happened in the aftermath of 2001’s “Supercharger” for that. So despite the criticism of “Catharsis” leaving it a surprisingly underrated record with some solid cuts “Of Kingdom And Crown” feels like a comeback album before we’ve even heard it.

Machine Head part the Red Sea with with “Slaughter The Martyr“, telling the tale in the first person with a powerful chant-able chorus immediately taking us back to “The Blackening” era of the bands sound. Flynn’s clean vocal parts are up there among his finest as the mournful and meloncholic vibe turns into a powerhouse statement piece with classical musicianship reminding us just how good Machine Head actually are. The rapid fire blitz of “Choke On The Ashes Of Your Hate” turns things up a notch with some Death Metal drumming with a couple of Sepultura inspired moments as it takes us on a head charge with a blistering Thrash inspired Death Metal solo that is nothing short of electrifying. If someone asks you what Metal is, this is a fine example to give them. Some incredible backing vocals from MacEachern on “Become The Firestorm” add a weight and gravity as the band demonstrate they are not only back on form but also back at their heaviest with crushing riffs and some of the finest and most expressive drumming to feature on a Machine Head record. That’s not a criticism of Dave McClain who remains one of the finest to grace a drum stool, however Koperweis work is nothing short of truly inspired. Three tracks in and if the album hadn’t been declared a concept record you could be forgiven that this was Robb Flynn raising his middle finger in defiance at the critics, there is nothing lyrically to suggest otherwise, especially as the lyrics are delivered through his eyes. “Overdose” is simply a pallette cleansing scene setter which is very well placed and doesn’t break the momentum (as do  “Assimilate” and “Terminus” later in the record) before “My Hands Are Empty” which has a writing credit for former Machine Head guitarist Logan Mader as the bridges previously burned by his departure from the group continue to be healed. A more melodic cut that harks back to the kind of thing the band have done in the past with “Descend the Shades of Night” but not quite matching that quality it has a cinematic edge which works really well. That’s part of the problem with any new Machine Head album, the bar has been set so high at times in the past that reaching those heights again and again becomes increasingly challenging and the weight of expectation makes that even harder. Other bands have suffered in the same way as the sands of time have shown, Machine Head aren’t the first and won’t be the last in that regard.

Switching from more Death Metal inspired material to something with powerful and emotionally engaging Progressive Metal leanings “Unhallowed” is another powerhouse of a cut, the mournful and meloncholic vibes perfectly placed to keep the album ticking over nicely and providing something fresh and darkly vibrant. On “Kill Thy Enemies” Jared MacEachern’s vocals once again shine, offering an interesting melodic contrast when cast against Flynn’s venom spitting parts and a classical extended solo that would grace a Trivium record is an absolute triumph. The heavy breakdown sections of “No Gods, No Masters” are an absolute pleasure during an otherwise anthemic sing-a-long chorus driven cut before “Bloodshot” once again turns up the energy a notch and and drives home the nails in the coffins of the would be critics with a solid Groove Metal rhythmic pummelling and a fretboard smoking solo. It’s a Mosh pit starting head bangers delight that confirms the boys are indeed back in town with an all killer no filler album that maybe an hour long but then listening to it, there is very little fat to be trimmed. The only real criticism is that as with a lot of bands who have been doing what they do for a long time and in Machine Head’s case since 1991, a little bit of riff recycling comes into play here are there. There are cuts that have an air of familiarity about them with points and “Rotten” is one of those, something which is a double edged sword it makes the album more accessible early on but then takes away from some of that longevity. The cut itself is a solid one that delivers a punch in the face with its approach, it just happens to be the one that we’ve chosen to mention the point. Epic closer “Arrows in Words from the Sky” is one that would have actually worked at any point of the album, a scorcher of a cut that finds the band able to contrast melody and brutality perfectly in seamless balance with slick transitions in timeless fashion. A more fitting conclusion to this beast of a 10th album from Machine Head you won’t find as Robb Flynn produces his finest work since 2011’s “Unto The Locust” as while he is the last man standing from that time, the others deserve a lot of credit as they share in having the bands name emblazoned upon it [8.5/10] 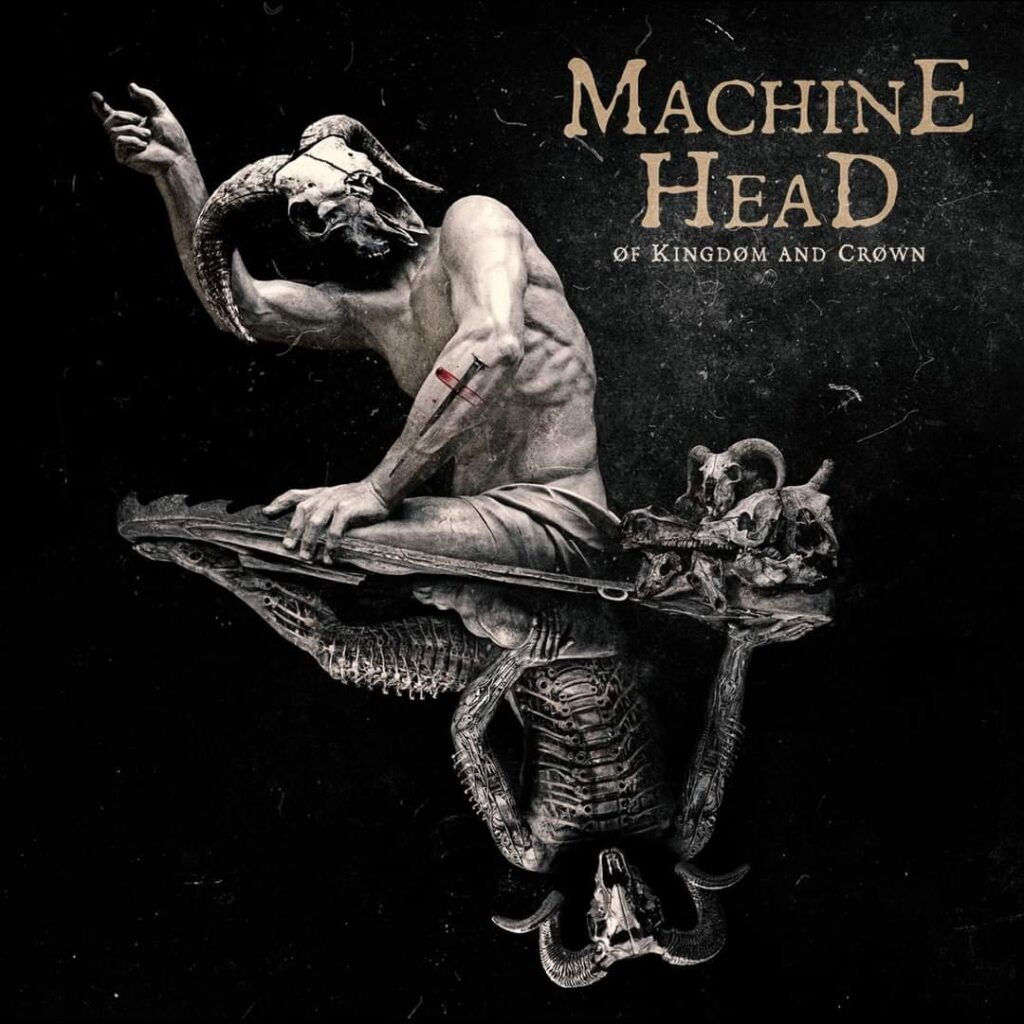