Roses are Red, Violets are Blue, Bad Dreams by My Latest Failure won’t love you. A piece of meloncholia, a ode to summer loves lost and an antidote to everything sugary sweet, Bad Dreams is a dramatic twist on My Latest Failure’s usual formula that may catch you by surprise. It’s been a week since that landed so we had a chat with the man, the myth and the legend that is vocalist and guitarist Chris Underhill about the story behind the single…

Your new single is a dark tale, what was the inspiration behind it? “Lies may have been our first release but Bad Dreams was the first song I wrote for My Latest Failure. When it was written I was listening to a lot of Brand New and was particular inspired by their music. I wouldn’t say Bad Dreams sounds like Brand New in anyway, I would never try and imitate another bands sound but they were a big influence to me when writing this song”

What’s the story behind the single? “Bad Dreams about a reoccurring nightmare, and the song takes you into this nightmare where you are standing on the edge of a bridge contemplating life and not seeing any other way out apart from jumping off. It’s not a nightmare where you’re being eaten by monsters or something, there’s an element of realism to it and that’s why I called it Bad Dreams and not Nightmares”

“It’s a sad song that throws the listener right into the bad dream, you’re literally “standing on the edge” from the first line of the verse. The lyrics in the first verse sets up the scene, what are you doing there? and how long have you been there for? While the second verse focuses on the actual reason you’re there and what you will be losing?  Before you know it the chorus has kicked in and you’ve jumping off”

The song feels like it’s a song written in the same style as the “Failures Vol. 1”. When was it actually commited to tape? “Bad Dreams was originally recorded in 2019 with Ross Walker from Sore Teeth for our Failures Vol:2 EP but didn’t make the cut as we felt the track was missing something. The other two songs Disappointment and Selfish were released as standalone singles as we decided at the time to scrap our volume 2 EP. We revisited the track with Ross Walker Productions in the summer of 2021 and was very happy with the outcome. When we revisited it the track I was heavy influenced by the Post-Hardcore music style, in particular the layered screamed vocals over the clean vocals which I had done for Arguments are Contagous (the Pete Drake Project)”

“When recording Drums for Bad Dreams Jamie smashed one of the microphones on the last chorus. We were unable to re-record this part at the time but luckily we were able to sample this from the pervious chorus in the song”

Bad Dreams has been in the live set for a while but playing it hasn’t always gone according to plan has it? “At a gig in High Wycombe (The Phoenix Bar) I broke my top string and had to skip Bad Dreams on the set list. Weaponry, who we shared the stage with that night, humorously addressed this on Facebook so we dedicated Bad Dreams to them when we played in Reading (The Face Bar) later in the year. Then when playing Bad Dreams at the Queens Head (Brixton), I completely messed up the solo and as so annoyed that I played the solo again at the end of the song to redeem myself. It went down well”

There was a reference to Bad Dreams online long before the single came out? “Yeah, in our A-Z of Failures mini series, J was for Jumping Off The Bridge and this episode talked about our song Bad Dreams. There are two versions of Bad Dreams and we released the second one. If anyone missed the series, they can find it here.”

“Bad Dreams” by My Latest Failure is out now and available over at bandcamp. 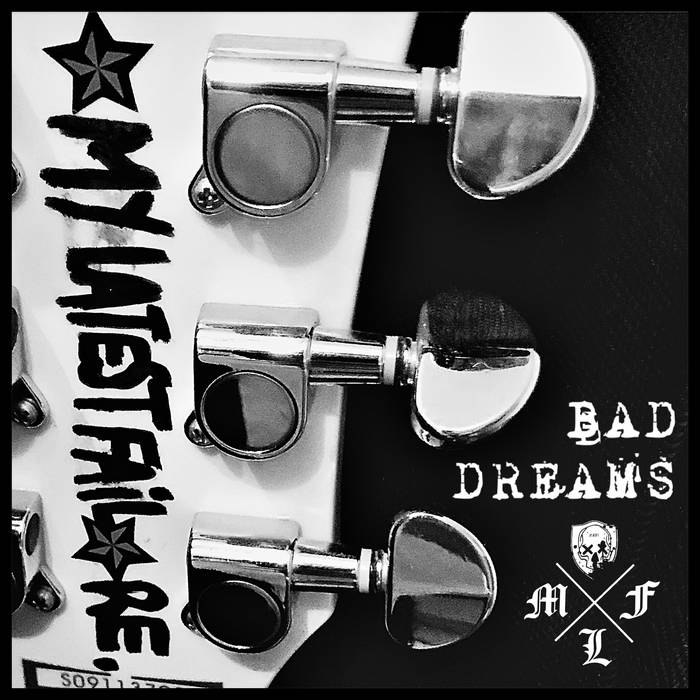