For almost a decade Canadian duo Deformatory have been creating no frills Death Metal and with three albums to their name in 2013 debut “In The Wake of Pestilence”, it’s savage 2016 follow-up “Malediction” and critically acclaimed 2021 masterpiece “Inversion of the Unseen Horizon” with which they have a reputation to uphold. To that end they turned to Topon Das (F*** The Facts) to record, mix, master and produce their first EP “Harbinger” at Apartment 2 Recording Studio in Ottawa, ON, Canada. Crafted with the utmost care, the band keep things both simple and traditional, organically writing in the rehearsal space, jamming and experimenting until something lethal reveals itself. Be warned, they’re already four cuts deep into writing and recording the follow up album…

The chaos begins with “Plagueworm“, the restless and relentless pounding from drummer Neil Grandy paving the way for the way for razor sharp riffs and demonic vocals of Charlie Leduc like a bombing run preparing the ground for troops of doom to move into enemy territory. Grandy is metronomic with his blasting and it has to be said that Topon Das has done an incredible job at capturing the drum sound the band wanted in it’s full unadulterated glory without using any post recording production tricks, leaving something that sounds organic and free flowing. “Corpseborn” finds Leduc not only burning the flesh from our bones with his caustic vocal performance but lighting the place up with an incendiary solo to accompany the riffs that border on the technical side of Death Metal that you might find with bands like Vitriol. The riffs hook you in instantly like an unstoppable force commanding you to headbang while at the same time pushing the boundaries of what you might consider to be modern Extreme Metal, the eerie atmosphere lurking beneath the surface throughout the record being purposefully unsettling. “Sunrot” hits like a battering ram after a haunting introduction, reminiscent of earlier works from the likes of Cryptopsy in the way the riffs play out with an almost schizophrenic frenetic energy, decorating the walls in blood as it goes. There is simply no escaping the shroud of darkness that cloaks the harbinger with this ferocious slab of Death Metal, the final piece of the puzzle being “Dustcult“. That marks the records longest cut as it scrapes past the five minute mark with consummate ease, separating the weak from the herd and preparing for the cull as there is no place here for those who can not stand the scalding heat Deformatory have to offer. Leduc even takes a moment to rip out a pair of solos that have some classical leanings during this one that acts as purification for the soul, the only surprise being the the fade to the plague winds of the apocalypse that threatens to bring it to a more abrupt ending that is called for…  [8/10] 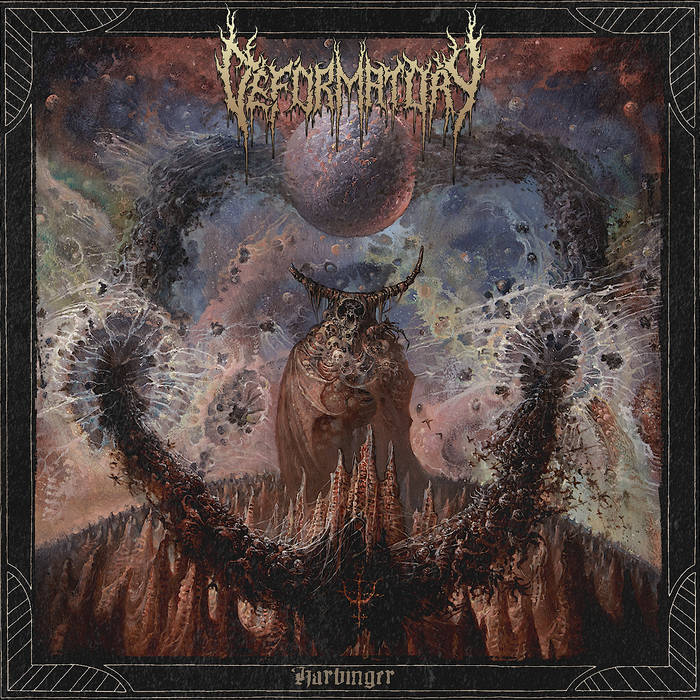 Tags:Cryptopsy, Deformatory, Harbinger, In The Wake of Pestilence, Inversion of the Unseen Horizon, Malediction, Vitriol