Skip to content
HomeReviewReview: “Collapse The Mountain” by Sonus Mortis

Having exited stage left from Melodic Death Metal act Valediction after serving seven years as their bassist for his seven deadly sins in 2012, multi instrumentalist Kevin Byrne went on to form Sonus Mortis a year later as a solo project initially in the realm of Symphonic Death-Doom Metal. Influences in Bolt Thrower, Opeth, Behemoth and even Paradise Lost reigned supreme with 2020’s fourth album “Hold This Mortal Coil” a critically acclaimed triumph which found him at the height of his powers. Then something changed and album number five, once again mixed and mastered by Mick Richards at Trackmix Studios in Dublin, Ireland brought about the arrival of Melodic Death Metal lead guitar work in abundance in a vibrant change of scenery…

Cleaving flesh from bone from the first moment of the opening verse “Holistic Cult” finds Byrne in venomous form, spitting blood at the birth of a new machine with a rotten soul. His Black Metal vocal style is perfectly suited to the long, angry speech of criticism and accusation thinly veiled in the lyrics, the sonic accompaniment falling between the styles of his past two albums. Rip roaring Melodic Death Metal leads in all their glory have been dialled back a little while a Symphonic closing that adds a touch of the cinematic, raising the hairs on the back of the neck. By the time “Render Us Obsolete” hits it seems clear that there is a concept running in the waters beneath the album, the rotting stench of the evils of society twisting and contorting as Byrne stands firm against them with a clenched fist of rage. The dark overtones are intense, the reading of the situation that humanity finds itself in showing a socially and politically awareness that some bands simply wouldn’t touch for fear of self destruction is refreshing to say the least. The strange thing is that despite being such serious subject matter, sonically the album is hard hitting good fun with cuts like “No Compromise” having a real Death Metal swagger in the approach as Byrne threatens to bury the hatchet in the skulls of his enemies. The intriguingly titled “Faoi Thalamh” means to burrow underground in the native Irish tongue and holds within its confines a rampage through Black Metal in a whirlwind of a tour de force about escaping the treachery of this World. A blistering 90 second burst of something that borders on Death-Grind, “Traumatic Amputation” is a new twist in the tale of Sonus Mortis that touches the void but doesn’t quite lyrically go all the way. It has the feel of Jonny Depp’s Sweeny Todd: The Barber Of Fleet Street story and is a dark new day shrouded in a cloak of mystery as it deviates from the lyrical path of the album in a fantastically dark fashion.

“Universe 25” distantly echoes the story underlying the original “Total Recall” film, a society split into two that rapidly descents into bedlam of dark nightmares. Sonically another masterstroke, it has a dark energy to it that transcends into a tastefully classical acoustic guitar closing that could well find Byrne giving us his pitch for scoring low budget science fiction films in the future. Reminiscent of the work of Devilment, “Reveal The Arteries And Attach The Leeches” brings a sense of the epic forth with another powerhouse cut in a record with a decent level of variety to it that does stray too far from the core sound. This one is perfectly weighted and paced so as to deliver the narrative with some Gothic touches that might catch you off guard. That sense of the epic then intensifies with “Rat Race Ritual“, the bleak lyrical narrative about the enslavement of the populous to the rat race resonating with every word, the pain in the heart of the vocals carrying across perfectly as the music creates an air of tension you could cut with the knife. That bleeds through the bandages into the album title track “Collapse The Mountain“, a magnum opus of epic grandeur that crushes the weak and leaves nothing but the smell of napalm in its wake. Dark and brooding throughout, the drop to symphonics and acoustics has the mesmerising qualities of shoegaze before the violent bloodbath of a finale that questions everything. After the darkness of the storm, comes the light through the clouds and the dawn of a new day. “Nanotech Required” flirts with Progressive leaning lead guitar vibrancy and staccato riff breaks in a powerful rhythm section. The storytelling once again coming to the fore however with longer instrumental breaks in a brave and yet rewarding movement into new, hitherto untouched territory. What Byrne can do is frightening, his skill undoubted, however on this evidence this World may destroy him before his due time [8.5/10]

“Collapse The Mountain” by Sonus Mortis is out 1st December 2022 and should be available over at bandcamp. 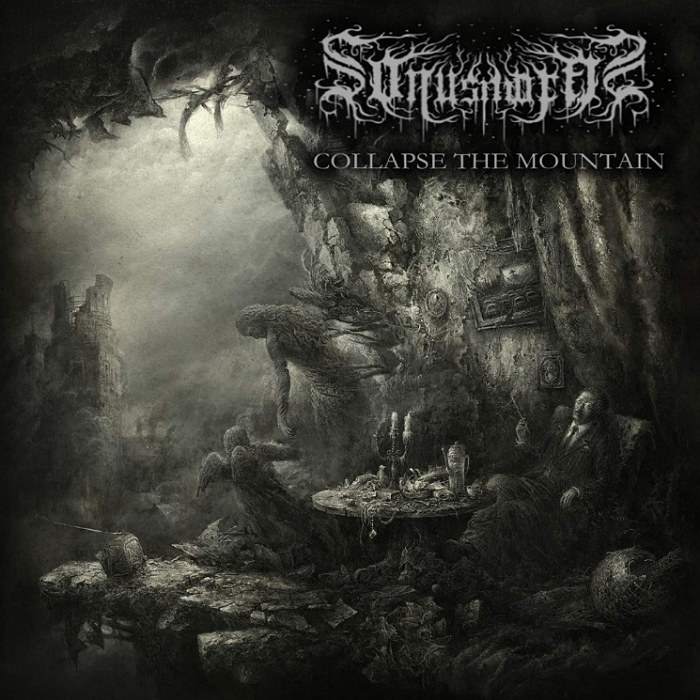