When distilled down to the bare essentials, Dystopia A.D. is a project masterminded by Chris Whitby who somehow has managed to perform vocals, guitars, bass, keyboards and drum programming to breath life into his vision. That leaves Aki Shishido to add some mesmerising lead guitar work and Charlie Munro responsible for drum arrangement, mixing and mastering “Doomsday Psalm“. The project began in 2017 with the guest filled debut album “Designing Ruin” lighting the way for 2020’s well received EP “Rise of the Merciless” which dispensed with the need for others in a display of death defying sub-genre leaps wrapped in fantastical guitar work…

The first chapter of tale of the “Doomsday Psalm” is “Imperial Dawn“, a masterpiece of American Progressive Melodic Death Metal that takes the bands previous offerings and redefines them in the fires of Valhalla. Classically heavy with interesting variation in the unclean vocal tones from Whitby, it has many nuances up its sleeves that will keep you coming back for more, something that is true of the album as a whole. At points its as if members of Nekrogoblikon, Revocation and Rivers of Nihil have formed a supergroup, such is the quality of this magnum opus. The programmed drums from Charlie Munro are sympathetic, the arrangements ones which would be perfectly playable by someone of blood, flesh and bone should the band wish to flesh out for live performances and the odd flat sounding cymbal hit aside work well. “Terminal Lucidity” brings forth a mournful quality to it with a couple of lush and vibrant solos that have a Jazz influence in them, painting in shades of black upon a bloodstained canvas with intriguing textural qualities that keep things interesting over the longer durations of some of these cuts. Almost clean vocals during parts of “Fields of Carrion” are a brave risk but one that pays off in spades by giving the cut a Traditional Metal edge to contrast the shriller throat shredding of the swamp dwelling beast that Whitby conjures forth for the verses. The duo get eclectic and perhaps even eccentric with the mid track flow, dropping out to acoustic rhythms overlaid by leads for a Folk Metal leaning moment before cutting back, once again enhancing the brutality of their heavier side, as if turning a kiss on the cheek into a bite of the neck. “Force-Fed Soma” keeps the violent turbulence alive with a imperial march style guitar style the the main rhythm section before indulging in warm synths that flow into, of all things, a trumpet solo from Nate Trier. That’s part of the radiant beauty that illuminates the darkest corners of this offering, there are no borders or boundaries and some of its finer moments appear in the least expected of places.

Instrumental “Lost Shores” is a glorious introduction to the second half of the album, washing away some of the darkness with vibrant leads from Shishido over a Progressive rhythm that creates a real sense of the calm before the storm of the title track. Another one to play on texture by interweaving both clean vocal moments and acoustic guitars into furious Death Metal onslaught giving the opening part an ethereal quality before diving into a Progressive Thrash leaning passage that stuns like a slap in the face from a lover scorned. It’s as if Nate Garrett from Spirt Adrift was a co-conspirator and the result is something masterful, timeless and compelling. Both “As Skies Collapse” and “Howl of Barghest” feature flutes from Vinnie D’Agostino which is not only left field but imaginative and brave, the former being a stunningly atmospheric piece that takes you on a journey from darkness into light and back again with a Progressive mid section that would make Pink Floyd blush sandwiched in between two thick pieces of crushing Death Metal. The grand finale is a thunderous percussive monster that flows from a lukewarm meandering introduction into a phoenix in full flight with razor sharp riffs. A couple of well thought out moments of Pagan Folk Metal intersplice it but have such slick transitions that the seams are barely noticeable to the point of being absolutely majestic. Once again the storytelling of cautionary tales is magnificent and with Whitby armed with at least four vocal styles as well as being a multi instrumentalist of note, this is one to write home about with Shishido adding the stardust in the form of leads and solos [8.5/10]

“Doomsday Psalm” by Dystopia A.D. is out 2nd December 2022 and is available for pre-order over at bandcamp. 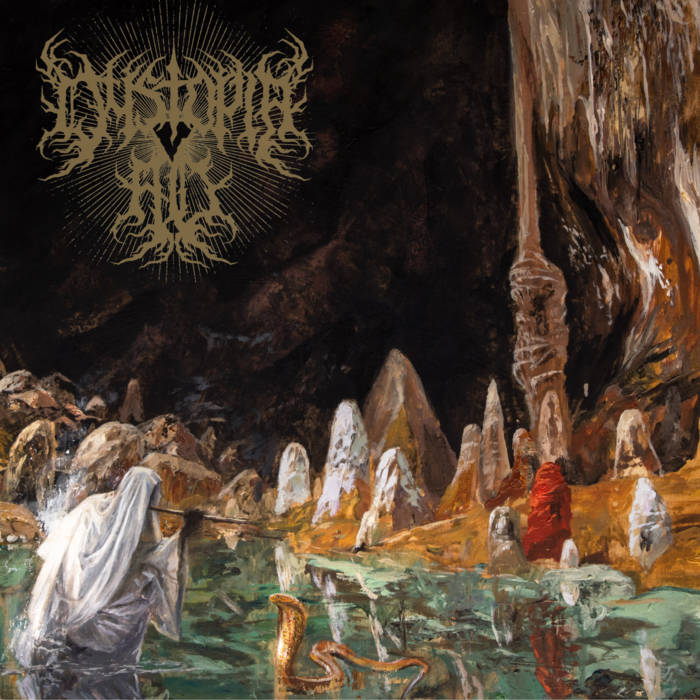