Oh how times change but somethings remain the same. Thunder Bay, Ontario, Canadians Alienatör wrote their last album “Pariahs” as two piece, combining Sludge Metal with Hardcore Punk and Noise Metal in a full on cathartic release back in 2019 but the World has turned since then. Now in 2022 they return armed with “Regrets” as a trio with original pairing vocalist and guitarist Brad King alongside bassist and vocalist Sean Skillen joined by Simon Paquette on drums. Once again the record is Mastered by Brad Boatright at Audiosiege (Obituary, Foreign Hands, Mindforce), with Skillen himself producing and mixing, the album is loosely a concept record. Running on themes which weigh heavy on the head, including alienation, grief, pain and disgust at the state of the modern world, the album was composed during the claustrophobia of the 2020 election and the global pandemic…

Channelling rage and catharsis before lulling the listener into a sense of security and then thundering down again into a feedback-drenched conclusion, each of the songs on “Regrets” has the power to destroy tall buildings in seconds, creating dust clouds visible from space. A slick bass groove brings “Revisionist History” to life, King’s shrill uncleans rattling the skull like a bullet ricochet as they echo with a violent ugly truth that simply needs to be heard. Cutting short at 130 seconds it bleeds through the bandages into “Loss Leader” as if the pair were star crossed lovers never to be parted. Another burly, grim offering it slows down to offer moments to muse on the restlessness of the lyrics. Flavours of Cancer Bats are soaked into “Blood Red Blood“, an obvious single with its chunky riffs and clearer, cleaner structures and house party attitude despite the venom of the lyrical narrative. Whereas the earlier pair were a bludgeoning, this has a real swagger and finesse to it underneath the blunt force trauma. The mournful “Regrets” then makes more of the riffs, which are often outshone by the bass on the record to give it a sheen as it plays out with a clenched fist of defiance, the melodies only just managing to escape the violent turbulence of the rest of the bands heavyweight rhythmic pummelling. Dancing with the Devil, “The Priest” is warning that people in power can be something other than what they seem as it tells the dark tale of Ralph Rowe. A Priest and Boy Scout leader who was convicted of sexually assaulting hundreds of first nation youths from the 1970s until the mid-1980s and somehow only managed to serve five years in prison because of a plea bargain. The cut is harrowing without going into the gore of the detail, the band proving they can do darkness with atmosphere while taking a psychological approach.

Flipping the script back to the style of “Blood Red Blood“, “The Less Dead” gives us a couple of minutes to escape the darkness of “The Priest” with a more commercial feeling Hardcore Punk cut that remains as sharply socially aware as its predecessors. Another single that stands out from the pack by being more instantly accessible than the rest, it still has plenty to offer. The tongue in cheek gallows humour of “Flat Earth Society” maybe lost on some but this socially aware piece that pokes fun at conspiracy theorists and truth deniers who believe misinformation is a prime slab of Alienatör real estate, gritty and harsh while getting the message across plain and simple. The history of genocide against Indigenous people in Canada is the subject of “Irreconcilable“, which has impressive dynamics with a slower and more powerful groove leading into a skull battering chorus that make it an obvious live set list choice. After the weight and depth of subject matter that points out the wrongs of the World “Wounded Birds” is more of a personal cut from King, something of an anthem for those broken and left for dead in the fields of trauma and depression, fuelled by alcoholism or substance abuse. A suitably melancholic affair, it offers the knowing hand of understanding with a cathartic quality and emotional depth in the vocal performance that creates a rewarding listen and would be a fine place to finish the album. But Alienatör have one more trick up their collective sleeves in “Dark Matters“, a swirling and unsettling cut that borders on the chaotic sonically, speaking of those things that keep you awake at night and resonating. Dark, powerful and honest, Alienatör have found their home… [8/10]

“Regrets” by Alienatör is out 25th November 2022 with pre-orders available over at bandcamp. 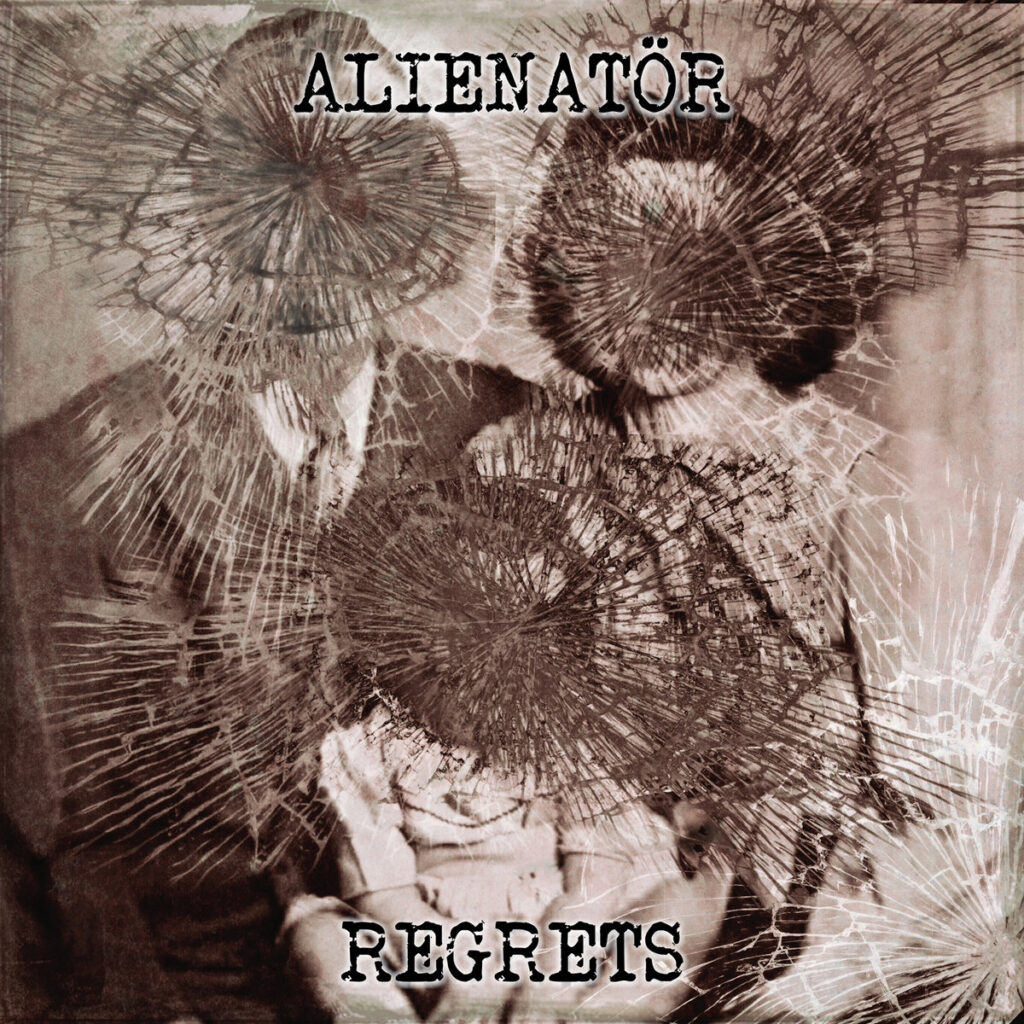