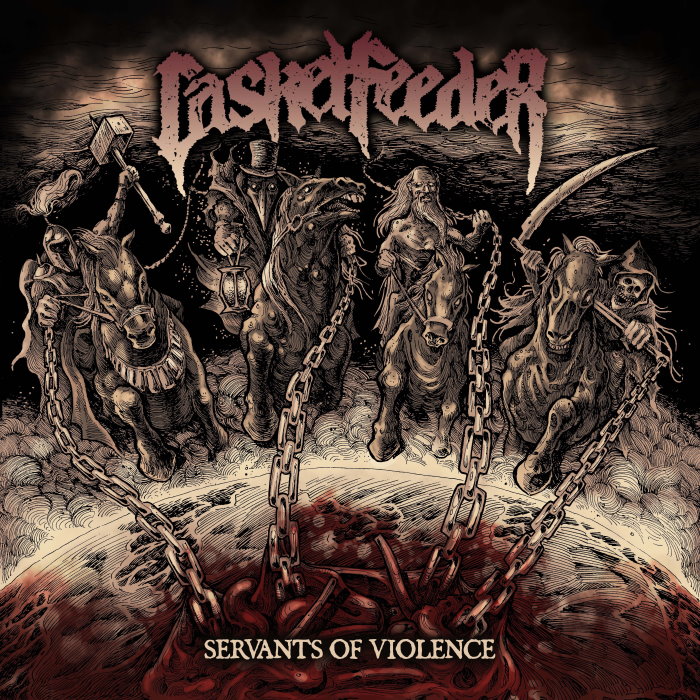 To celebrate the release of their debut album “Servants of Violence“, produced by Stu McKay (Malevolence, Ingested) and mastered by Brad Boatright (Gatecreeper, Skeletonwitch), Hardcore homewreckers Casket Feeder have dropped a music video for “Edge of Collapse”. Thematically, this song confronts the stark reality of climate change and the ruinous path humanity is being forced down
Read More

Produced by Stu McKay (Malevolence, Ingested), mastered by Brad Boatright (Gatecreeper, Skeletonwitch) and accompanied by artwork by Roberto Toderico (Pestilence, Vomitory), the debut album from Casket Feeder takes aim at the darker side of humanity with a finger poised over a hair trigger, safe in the knowledge that both barrels are set to delivered with lethal
Read More

Following the vicious initiation ceremony that was “Vulture Culture” from Death-Hardcore upstarts Casket Feeder, the first from their upcoming album “Servants of Violence“, the five piece have returned with the sucker punch of “Doomsday Prophecy“. So far, the album is shaping up to be a progression from the bands critically acclaimed EP “Scalps“, blending the
Read More

Surrounding themselves with a high profile team, Casket Feeder have announced details of their upcoming debut album alongside a music video for new cut “Vulture Culture” recorded and edited by Timfy James (ex-Hacktivist, ex-Heart Of A Coward)  at The Old School Studios in Milton Keynes. Produced by Stu McKay (Malevolence, Ingested) and mastered by Brad
Read More

A Non Profit Charity Show in aid of MacMillan Cancer Charity “Death To Cancer” entered it’s fifth and final year with arguably it’s most brutal line up to date! For one day only, it’s The Black Heart in Camden that will get destroyed by some music to bleed from the ears to! We arrive to
Read More

9th June will see a new Suffocation album entitled “….Of The Dark Light” appear via Nuclear Blast. Having just completed an extensive UK and European tour, the band will return for a festival run this summer and have announced a UK warm up date before their appearance at Sweden Rock Festival. The American Technical Death
Read More