There are a few translations to be found for the title of the second second chapter in the Acid UFO Death Cult experience and while “to darken” is subtle, the old testament quote in which it’s found “misery, adversity. Isaiah 9:1; Job 15:22, לֹא יַאֲמִין שׁוּב מִנִּי חשֶׁךְ “he does not hope to return out of darkness (or destruction);” ” feels more comfortable. Written, recorded, mixed and mastered by Ali, the multi instrumentalist mastermind behind experimental projects Mountain Hermit and Woods at Dusk, this one is Black Metal from Rome, Italy and finds him joined by bassist and vocalist Ω. That marks a change from the first output of the project in “Oblivion“, a three track affair arriving just four months before this one which saw Ali himself handle everything…

The call of the beast as it rises from the black depths is heard in terrifying b-movie horror style in “Full Moon“, a clever palette cleansing introduction that wipes the mind clean while at the same time capturing the attention in time honoured fashion. The haunting notes of an organ are accompanied by the machine gun fire metronomic sound of a drum machine as “Depressive Summer” chills to the bone with atmospheric Evil and caustic vocals with a feral and raw quality. It makes for the kind of nails down a chalk board of a punishing listen that you can’t drag yourself away from, the swirling oppressive darkness drawing you closer to the eternal flame. Raw and primitive primitive while also having moments of dark cinematic quality, “Sun Outside, Chills Inside Me” is the kind of piece of music that belongs on an eclectic and eccentric film soundtrack. Meloncholic spoken work passages sit neatly between scathing, throat shredding vocals, the rantings of a man at the edge of the abyss and guitars that sound like they were recorded in cave before the gun shot that signals the end catches you off guard. That would have actually been an intriguing note to end this offering to the Nordic God’s with but instead we have a pair of futher cold embraces. “Aesthetic of Decadence” drives down the darkness in similar fashion to its predecessor which has the effect of creating conjoined twins, each with a life of their own. This one has a few avant-garde moments nuanced into it that reveal themselves as the horror unfolds, punishing the ear drums further with the restless and relentless rhythmic pummelling of the drum machine, it’s tinny obsession the cause of tinnitus in would be listers. “Ruins” completes this 17 minute monstrosity with the cries of a banshee slowly melting in a pool of acid, a fitting conclusion to something that Troma Entertainment could use for a Black Metal version of The Toxic Avenger. Ugly and deformed, Acid UFO Death Cult still find chinks of light that pierce the black clouds they create [7/10]

“חשֶׁךְ” by Acid UFO Death Cult is out now and available over at bandcamp. 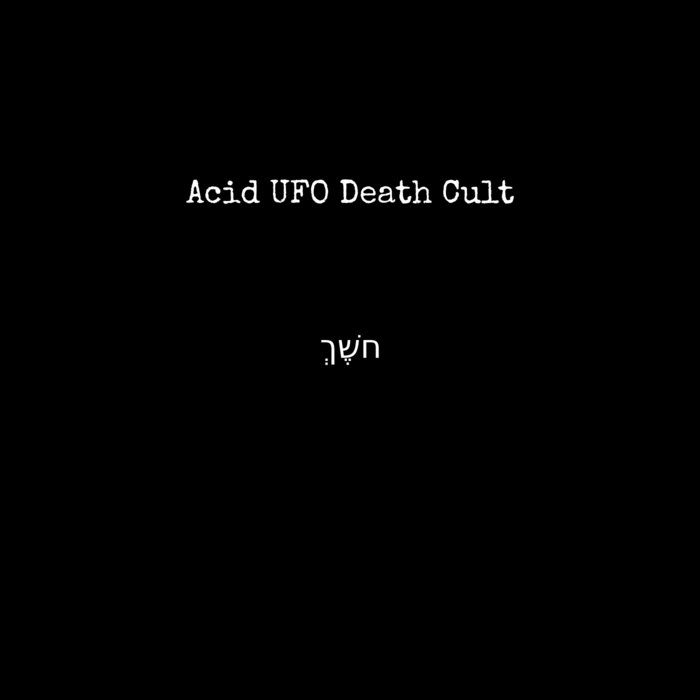