“I’ve never done a concept record before so I wanted to try to tell a story in great detail over an entire record rather than just one song. As dark and gruesome as the concept is, the underlying theme is the feeling of carrying around emotional baggage and trauma your whole life and the effects it takes on someone. Life is a heavy burden sometimes” ~ Josh Richter, Vocals

The concept to which Richter refers is a metaphorical tale of conjoined twins, where one half of the pair dies. The remaining twin must continue on in life, carrying with him a corpse he can’t be rid of. Beneath what lies on the surface, the record is an exploration of what it means to bear trauma and the toll it takes after a lifetime of being weighed down by such inescapable feelings. While you take a moment to ruminate on the weight concept, think about the fact that this record is th first from a band formed this year in Columbus Ohio. That means that in a relatively short space of time, the group, rounded out by guitarist Nicky Richter, bassist Ethan Martin and drummer Keenan McNeal, have established a sound that infuses Death Metal with the raw emotion of Black Metal and the anvil heaviness of Sludge.

The harrowing nature of the lyrical narrative is matched by the sonic darkness of “The Darker Half” with the caustic throat shredding vocals of Josh Richter being clean enough to understand every single word as it’s cast against a backdrop of primal sonic abrasions meaning that there is absolutely no escape from any of it. This isn’t the kind of record where the depth and weight of the lyrics are there if you want them and you can switch off and enjoy the music if you don’t. This is full on an not for the faint of heart as the churning riffs of “Broken Mirror Image” cut through the vocals in the classic 90’s Noise Metal style of bands like Converge or Will Haven. Despite the relatively short duration of these cuts, that actually serves to make the record feel longer than it is because the riffs feel drawn out, which is by no means a bad thing. Josh Richter sounds like he’s gargling blood by the time “The Amniotic Lake” takes hold, another dark tale that flows like a brain haemorrhage from his mind as it decorates the walls with his thoughts. The difference here is that in most Death Metal bands you wouldn’t be able to hear the weight of the lyrics as they would be carried away by the tsunami of frantic and frenetic energy. Here the bands stripped back approach means that the gritty raw nature of the lyrics can be conveyed in full and understood without the need to dial down the caustic vocal approach. The best cut in terms of atmosphere has been saved until last with “Sacrificial Bastard“, which swirls the shroud of darkness as it plays out with a contorting bass line and momentary burst of Black Metal drumming. Whether the vocal approach could be endured alongside such harrowing lyrics a full length is an interesting question but here it certainly leaves its intended impression [7.5/10]

“Shared Nightmares” by Gnash is out 22nd September 2022 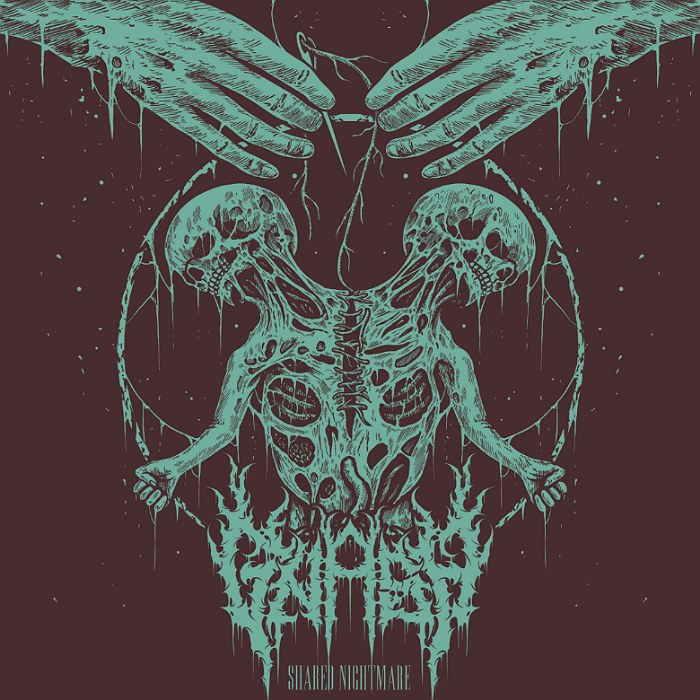