Skip to content
HomeReviewReview: “The Entombment Of Chaos” by Skeletal Remains

Originally forming as Anthropophagy in 2011, Californian Death Metal quartet Skeletal Remains, now comprising – Chris Monroy (Vocals and Guitars), Mike De La O (Guitars), Noah Young (Bass) and Charlie Koryn (Drums) – have spent the better part of the last decade playing shows across the US, Europe and Japan having unleashed a trio of albums, each of which have been critically acclaimed. 2012’s “Beyond The Flesh” and 2015’s “Condemned to Misery” broke the ice and saw the band leap from the relatively unknown German label FDA Rekotz to Century Media for 2018’s “Devouring Mortality” and allowed the floodgates to open as the band shared stages with Obituary, Hatebreed, Municipal Waste, Power Trip and The Black Dahlia Murder…

…so where are Skeletal Remains two years on? Still very much signed to Century Media and with album number four offering 10 new tracks and a surprise Disincarnate cover. Introduction piece “Cosmic Chasm” is very much your ethereal Alien Horror film soundscape, setting an eerie vibe before the band go full throttle into first cut proper “Illusive Divinity“. Koryn’s pulverising percussive patterns and Monroy’s brutal bark give this one the charm of “Arise” era Sepultura with some of the edge of masters like Suffocation with a short and sweet whammy bar drop solo showing some Thrash influences. Koryn’s relentlessness continues into “Congregation Of Flesh“, a track that depicts a cult giving a sacrificial offering to a being they’re calling a God in the hope of bringing forth the physical form of the being. Monroy not only delivers the goods with his Evil vocals but the storytelling of the lyrics are cleverly constructed, taking influence from a variety of horror films. The sweeping riffs and high energy incendiary intensity shows no let up with “Synthetic Impulse“, which offers menacing riffs and a face melter of solo which Karl Sanders of Nile would be proud to call his own. Monroy has a dry, raspy vocal style that doesn’t deviate with other voices, reminiscent of John Tardy of Obituary fame. It suits the bands style and his lyrics well but on a longer release it’s easy to see how it can become a little bit monotonous, if it wasn’t for the high grade Semtex quality riffs.

“Tombs of Chaos” marks the album title track as a mid album ripper that lyrically includes the album title and delivers a powerhouse whammy bar solo that belongs on a Power Trip record. The second solo, which builds from a harmonic into a glorious lead flourish is mesmerising and when the capability is there you can’t help but feel like more solos in the bands material would be a great addition. Eerie instrumental “Enshrined In Agony” brings haunting overtones with a meloncholy acoustic guitar and some other Worldly sounds in similar fashion to the album introduction and acts as a palette cleanser that splits the album clean in half, setting up “Dissectasy” as the monster that the title suggests. Monroy rants about surgical abominations while the band provide a lethal dose of Death Metal Groove to bang your head to. Charlie Koryn replaced Johnny Valles after the last album and the upgrade in the rhythm section pays dividends when “Torturous Ways To Obliteration” hits. A powerhouse cut with a ripper of a solo, it proves that the band have what it takes to rage with the best of them while having plenty of life of their own. The crown of Slayer remains there to be taken, Skeletal Remains need to maintain a stable enough line up to obtain it.

A long fade in to start “Eternal Hatred” with its marching riffs as the beast approaches is a nice touch from the producers chair. A more restrained cut that slows down the bands relentless rhymic onslaught but doesn’t take away any of their intensity makes for a stand out as a real point of difference, showing that the band have much more in their locker that just the nitro fueled material and can craft something just as heavy in other ways before the assault and battery returns with “Unfurling The Casket“. The opening lead flourish and solo sets the tone and the lead moments just keep on coming. The syncopation of the guitars is spot on and the band have left nothing to chance with the ghosts of an older generation of Death Metal bands haunting their material despite its modern, powerful production. That leaves only room for one more, a cover of “Stench Of Paradise Burning” by Disincarnate which does something that no other cut on the album does. It sees Chris Monroy, the last man standing between line up changes in Skeletal Remains, use a different voice. A slightly higher pitched tone gives a cleaner result and more audiable lyrics and that makes for a final finale worthy of any Death Metal album [7.5/10] 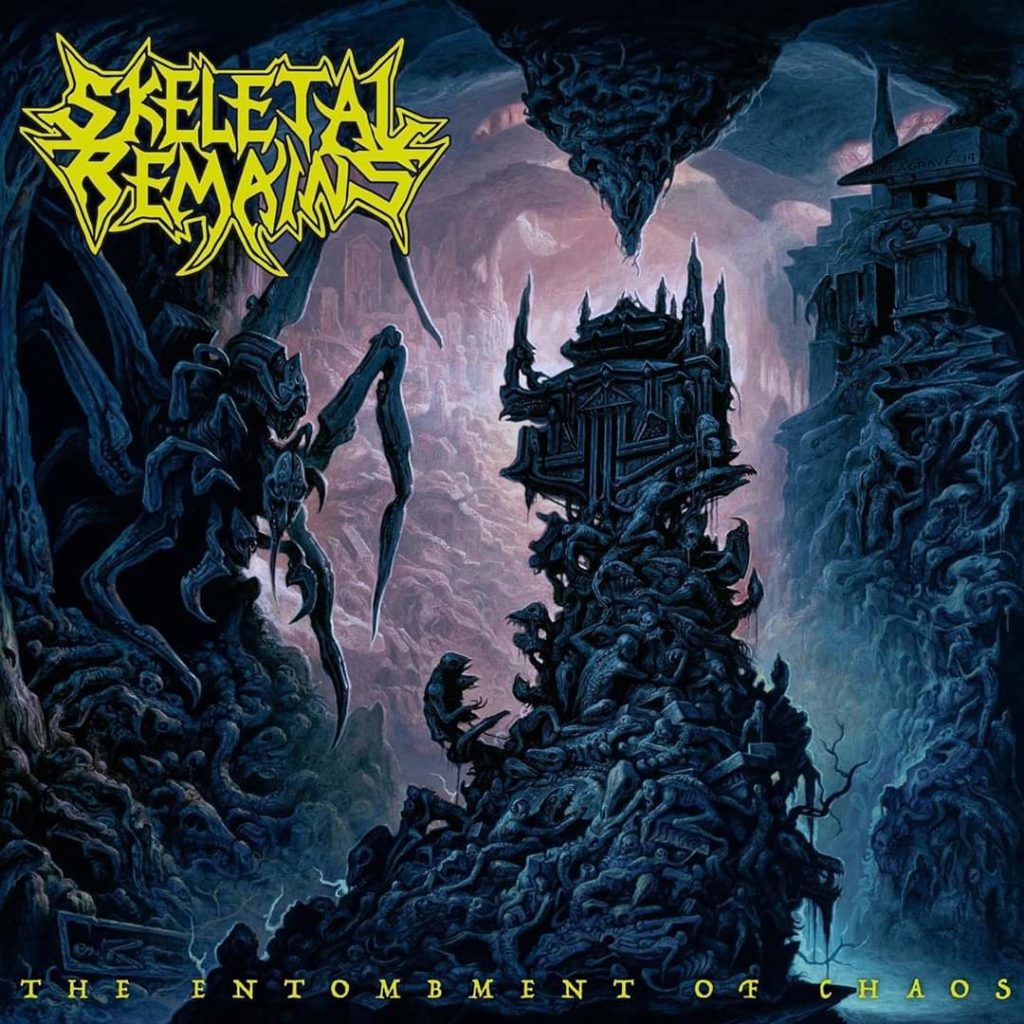