Skip to content
HomeReviewReview: “Congregation Pestilence” by Drawn And Quartered

Both a formidable and influential force in the realm of Death Metal over the past three decades, Drawn And Quartered first arrived on the scene back in 1992 in Seattle and since have unleashed a discography of seven critically acclaimed full length records. While they may not have achieved the level of recognition that other lesser lights have enjoyed, their endurance and commitment to delivering Death Metal mastery should not be forgotten and as they return for an eighth throw of the dice with “Congregation Pestilence“, the veterans return to Gabriel T. Byrne who has crafted cover artwork for every single release. Mixed and mastered by Loïc Fontaine (Autokrator, N.K.V.D.) at Krucyator Studio having had Simon Dorfman’s drums recorded by Chris Manino at Die Burning Studio with the remainder recorded by recorded by guitarist Kelly Shane Kuciemba at the Plague Pit, the album is one some may already be familiar with as several cuts have already been performed live.

As “Death’s Disciple” ploughs through your brain like it were freshly fallen snow with bassist Herb Burke’s demonic plague esq vocals reverberating around the cranial chamber, the sinister riffs take hold like a Boa Constrictor around your neck. Burke’s vocals maybe more distinguishable than Tom Bradfield of Twitch Of The Death Nerve, but the similarities are definitely there and with each pummelling moment, Drawn And Quartered show why they should be respected. “Age of Ignorance” continues the sinister darkness but also offers frenetic moments of pure aggression that are not to be missed, those riffs benefiting from the studio work of the underpinning drumming which is so full on, you wonder if Dorfman is a man or a machine. An unrelenting force that can only have calloused and splinter ridden hands, he a master of technique when it comes to this flavour of Metal. The churning off kilter riffs of “Oblivion Pilgrimage” are nauseatingly good and offer something approaching groove in a Medieval celebration of violence and devilry and similar styling works incredibly well if more sparingly in the ferocious and bloodthirsty “Rotting Abomination (The Cleansing)“. Its as if the trio are a beast whose hunger for Death Metal is never satisfied and by the half way point of the record with the Helter Skelter riffs, virtuoso solo and whammy bar drop of “Proliferation of Disease” you may find yourself wondering how they haven’t spent a good proportion of their career on a bill with Deicide, which is testament to the quality of musicianship on show here. The quality of the recording may not be as razor sharp as it could be; there is certainly an aged sound to some of it although whether that is on purpose to give it an Old School feel or not, it is hard to tell, no one wants this kind of darkness polished too much and it has plenty of charm. “Six Devils (Trepanation)” brings a couple of more technical sounding riffs from Kuciemba while Burke’s final roar is one of the night demon extinguishing the life of its prey. Masters of swirling storm clouds of darkness that reign hell with plague and pestilence, Drawn And Quartered should be celebrated as purveyors of the genre that leave nothing but ashes in their wake [7/10] 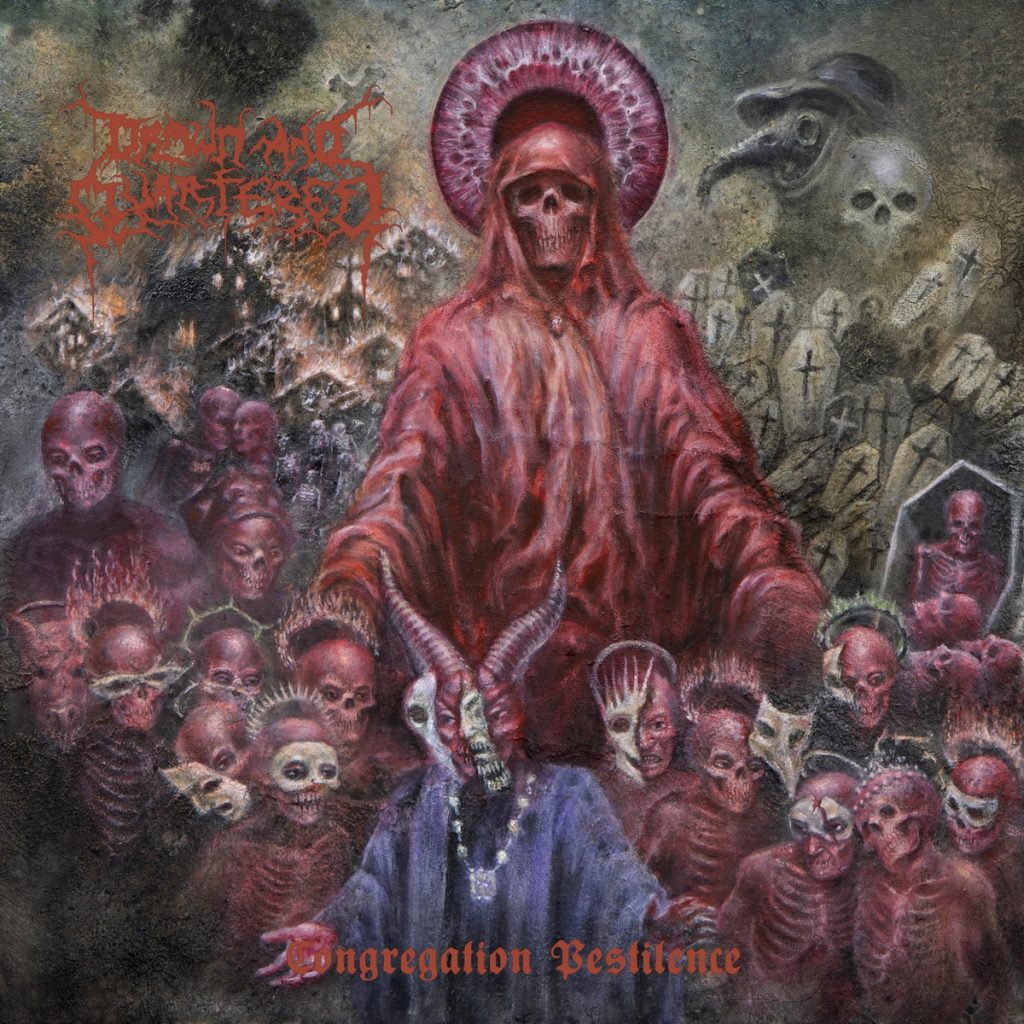