Skip to content
HomeReviewReview: “Vacua” by Every Hour Kills

“This record is a culmination of a dark, tumultuous f***ed up year in the world and in my personal life, as it was for many people around the world. As lucky as I am to still have work and my basic needs met, the emotional rollercoaster still affected me strongly and I ended up unemployed for a period in 2020, and thus this EP was born. It is both more human in that I collaborated more strongly with new songwriters and Jei on vocals, but also more mechanical as I also wrote with the assistance of AI creation tools, and most of the instrumentation is programmed MIDI. I feel like this is my most honest work as a writer, to express what came to mind rather than fit into a box or template of what Every Hour Kills ‘should’ sound like. It may alienate some people but so be it!” – Sacha Laskow – Every Hour Kills

There isn’t growth without some kind of pain and for Calgary, Canadians Every Hour Kills that pain is what this new EP “Vacua” is born from. The band consider themselves something of a new breed, essentially a rotating collective of musicians with guest appearances with guitarist and producer Sacha Laskow (ex-Divinity, Enditol) and bassist Brent Stutsky (ex-Breach of Trust) as its beating black heart. While the first album “Re:Awaken” features Jerrod Maxwell-Lyster (ex-Out of Your Mouth) as the sole vocalist of the group, this new offering sees Jei Doublerice (Abiogenesis, Despite Exile, Sensory Amusia) join them as well, giving them twice as much vocal prowess. There is also a central theme to the project as a whole that essentially asks the question: how will emerging technology and our humanity progress and co-exist? Welcome to The Matrix.

Recorded, Mixed and Mastered by Sacha Laskow himself at Perfect Filth Studios, there is no outside ear on the record to provide an anchor or suggest ideas; “Vacua” is an entirely self created monster that lives and breathes only from the fires the band themselves fuel. That can be a double edged sword but here it works to Every Hour Kills advantage. Opening introduction instrumental piece “Palindrome” is a piece of classy Tech-Metal with DJent leanings that is just getting somewhere when it cuts dead and begs to be revisited at a later date as it could easily be three times longer. Title track “Vacua” then hits you like the right hook from a heavyweight boxing champion, with obvious comparisons to bands like Periphery and Veil of Maya in terms of styling. Jei Doublerice is a the kind of vocalist you might expect to grace a Deathcore band, his blood spitting vocals lower than the tuning on the DJent guitars while also carrying off some unexpected rap screams during “Euclidian“. Jerrod Maxwell-Lyster then brings an ethereal kind of almost ghostly clean vocal element to the music with a timeless quality that is haunting. The tracks are loaded with spine juddering DJent polyrhythms and rich synth programming; the choice and pacing of the drum machine means that they could expand their line up to incorporate a human drummer if they wished and to be honest there is so much going on in these cuts that you don’t have time to appreciate it all in one sitting, let alone notice the machine. “Tenebrous” is all heavy chugs and breakdowns while Jerrod Maxwell-Lyster gets more vocal parts before things change up, the synthwave moments offering a space age soundscape upon which everything is pinned but its “Intransigent” that is the jaw dropping finale. Arguably the heaviest song Every Hour Kills have released to date, it encompasses the concept of chaos and infinity lyrically while bludgeoning the listener to death with the slow, nails on a chalk board dragging low end. This is very much the dawn of a new age; the beginning of a new life cycle; the transition from human to mechanised warrior [8/10] 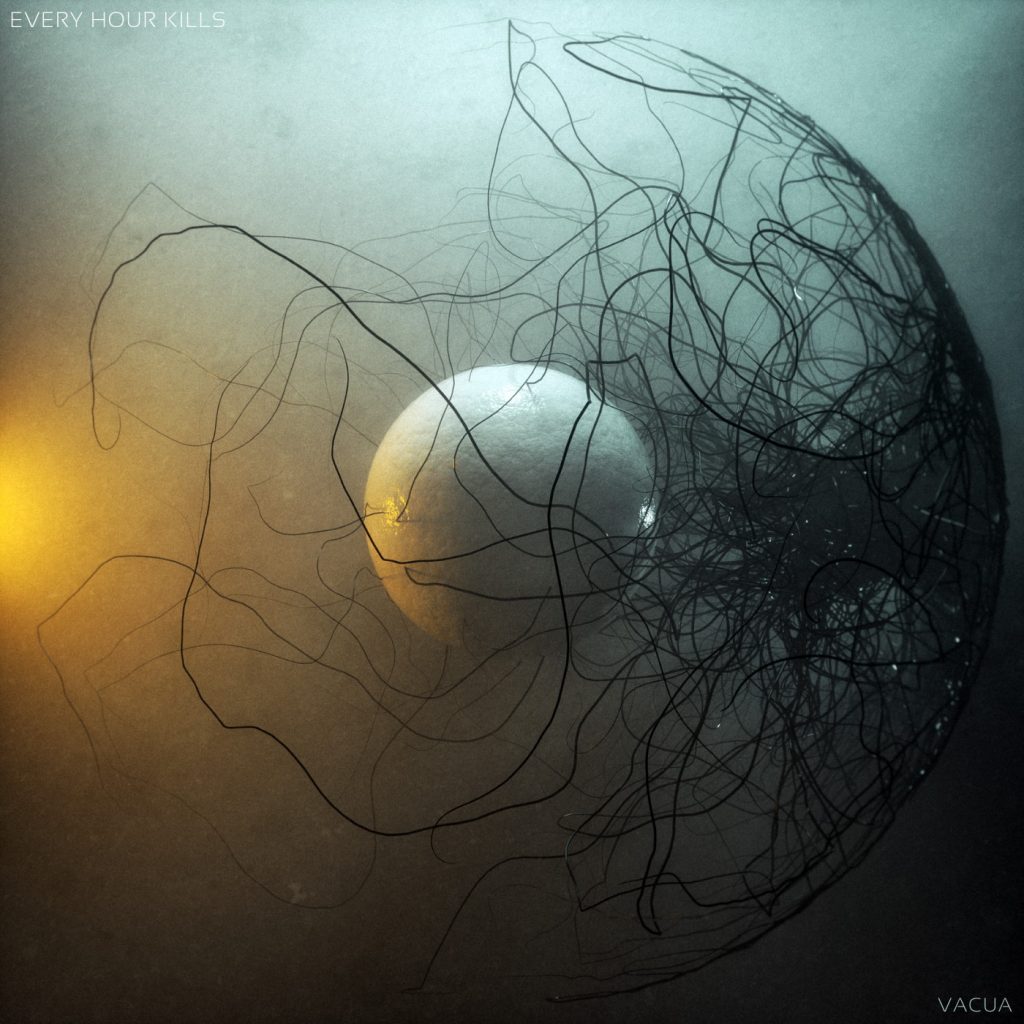