“The musical/philosophical doctrine of Imperathron emerges from the intellectual quest to recreate the sound of death and its dark paths, passing under the gray thresholds of stoicism, death and war, with the will to power as the only guiding star in a sky blackened by the existential desolation of modern man. In this unsuccessful but unassailable search for compositional excellence, an attempt is made to materialize these concepts, letting the musical instruments collude in a concerted hymn to death, with organic resources, mixing the brutality and violence of death metal with more lugubrious and cursed passages, with some pale lights of harmonic hope, which are quickly perverted by anachronistic dissonances vomited by the conspiring work of the strings that mercilessly remind us that, finally, all is lost. Traditional elements also emerge in all of this, such as baroque fugues possessed by vengeful forgotten gods. The composition of the themes is a coldly calculated chaos in each second of rapid but eternal agony, giving Imperathron a unique and evocative sound character” ~ Imperathron

A Blackened Death Metal trio hailing from Santiago Chile, Imperathron are a fine example of what can be achieved when sat in the centre of the Bermuda triangle between genres of Metal, drawing influences from classic acts and having the musicianship and foresight to be able to balance on a razors edge the raw and emotive nature of Black Metal with the aggression and brutality of Death Metal. The evidence bassist and vocalist Alfredo “Bizarrvs” Torres (Degotten, Grisvelos, Inhuman Entity, Maniaco), guitarist Fernando “Ogro” Vargas and drummer Cristian González place before us in “Mors Est Veritas” is undeniable with four of the cuts re-recorded from their September 2021 demo “Mercy for the Despicable” at Greyhound Recording Studios (Inhuman Entity) taking pride of place.

The winds of plague set a haunting tone before “The Human Must Be Overcome” roars into life with the demonic vocals of Torres and the blasting of what sounds like a drum machine that has been programmed sympathetically to afford the opportunity to allow a drummer of flesh and bone to replace it for live shows at a later date. The metronomic brutality is skull shatteringly intense with “Ophidism of the Gods” (read: poisoning by Snake Venom of the Gods) combining the melancholic leads from sombre Black Metal with the swirling darkness of Death Metal to create a searing heat to accompany the brutality. It’s the audio equivalent of enjoying the heat of a Carolina Reaper, the burn is only felt by those who are yet to experience the true force of the genre as the chaotic storm of blasting with dark and sinister riffs reaches its height. The blood gargling vocals of Torres are almost monotone at times as he summons dark forces from the black depths and places a curse on those that would dare to cross him, he sounds like a man possessed by creatures who can not walk this Earth and the brutal roars on “Death Will Give Me Glory” are as bitter and twisted as they come. The band reach the height of their power with the pummelling that is the album title track, putting all their energies into creating a captivating rampage through burning fields of scattered bodies cut down by the interplay of razor sharp riffs with a real bite in the guitar tone and the bands furious violent energy. A tour de force of Blackened Death Metal, all this album lacks is one or two perfectly executed solos to augment the bludgeoning [7.5/10]

1. The Human Must Be Overcome
2. Ophidism of the Gods
3. Demons of Steel
4. Death Will Give Me Glory
5. Mors Est Veritas
6. Mercy for the Despicable 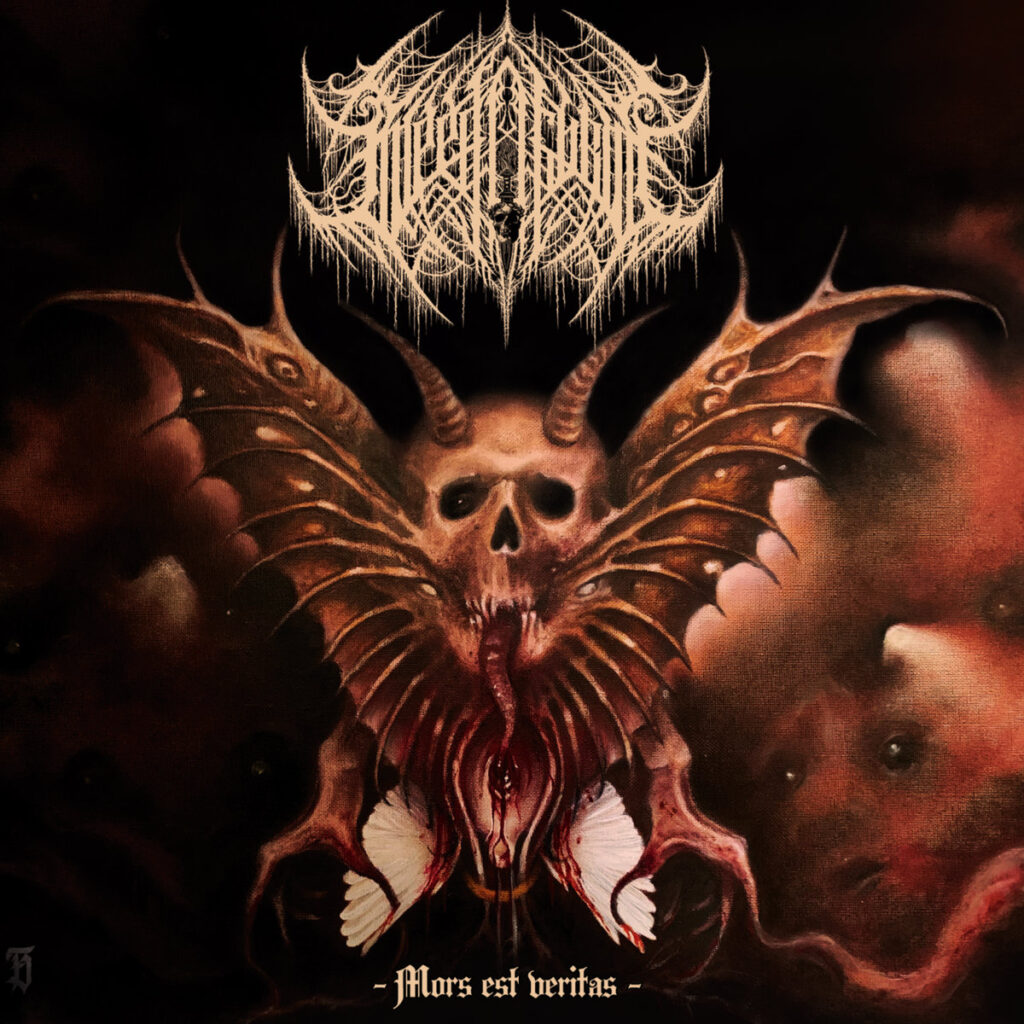