Skip to content
HomeLive ReviewLive Review: Bleed From Within w/Kill The Lights & Ingested at The Dome, London!

Father please forgive me for it has been two years since my last confession. Well, not quite but other than the live streams, a hand full of local shows and of course Rabidfest, tonight’s sold out show from a sold out tour will see 600 people at The Dome in London for the first run of headlining shows in the era of “Fracture” from Bleed From Within. The Glaswegian Metalcore merchants have enjoyed a run to these shows by supporting Bullet For My Valentine at arena sized venues as they released their self titled record but there is nothing quite like being the headliner and knowing that all the fans in the auditorium are there for you. Especially when you’ve recently announced the end of an era by leaving long time label home Century Media and signing with Nuclear Blast.

Believe it or not, this tour is the first for Kill The Lights [8/10] and the London stop marks their fourth show in all as they released their debut album “The Sinner” via Fearless Records in 2020. As a band they unite original Bullet For My Valentine drummer Michael “Moose” Thomas and bassist Jason “Jay” James with Throw The Fight vocalist James Clark, Jordon Whelan of Still Remains and Travis Montgomery of Threat Signal to create a supergroup in every sense of the word. It’s unfortunate to say the least that a band of such quality is playing to a venue that’s filling due to extra checks but as a collection of seasoned veterans this band know how to put on a show and will very soon be headlining on their own. As the Bleed From Within drum rig is so huge, both support bands have set theirs up either side of the stage and so it feels a little weird seeing the band in an L shape rather than the usual line but the music remains as tight as it gets. Bassist Jay may not have been part of the band when the album was recorded but he is very much an integral part of the live show, handling all of the unclean vocal parts and saving Clark’s voice for those soaring cleans he’s famous for. The bands set is over far too soon and they are by far the best opening band you could want to see.

Mancunian Slammers Ingested [8/10] are very much the surprise package on this bill, sandwiched between two less heavy bands with their raw and aggressive blend of groove laden savagery with Death Metal influences and having dropped not only “Where Only Gods May Tread” but also “The Surreption II” during the time of live show famine they have plenty of energy to unleash. Tonight they take the stage to the kind of welcome usually reserved for home town heroes and blast through their set with the kind of fire and brimstone they have made their name on with tracks like “The List” and “Better Off Dead” taking pride of place. There is strictly no stage diving tonight and security picks up and puts down anyone who crowd surfs to the front, however that doesn’t stop one lucky fan from getting a selfie with Jason Evans before the band treat us to a new song titled “Rebirth” that has more than a hit of Deathcore bounce to it.

As good as the other bands are, everyone is here for Bleed From Within [10/10] and from a time of famine, tonight is quite literally a feast of riffs from the opening seconds as everyone sings along to opening cut “Into Nothing“. The band have changed up their live show to make it a full on audio visual experience that bathes the audience in red light while playing snippets of video behind the band, the result of which is stunning. There are quite literally too many highlights to mention however cuts like “Alive“, “Ruina” and “Ascend” are monsters that are played to perfection by a band in their element, even if Scott Kennedy’s voice is unusually croaky between songs. The aforementioned signing to Nuclear Blast saw the unveiling of a new song and “I Am Damnation” is of course given an airing tonight as the promise of a future so bright it could burn our retinas. What more could we possibly ask for? Only pyrotechnics, which of course would be reserved for the arena sized venues… 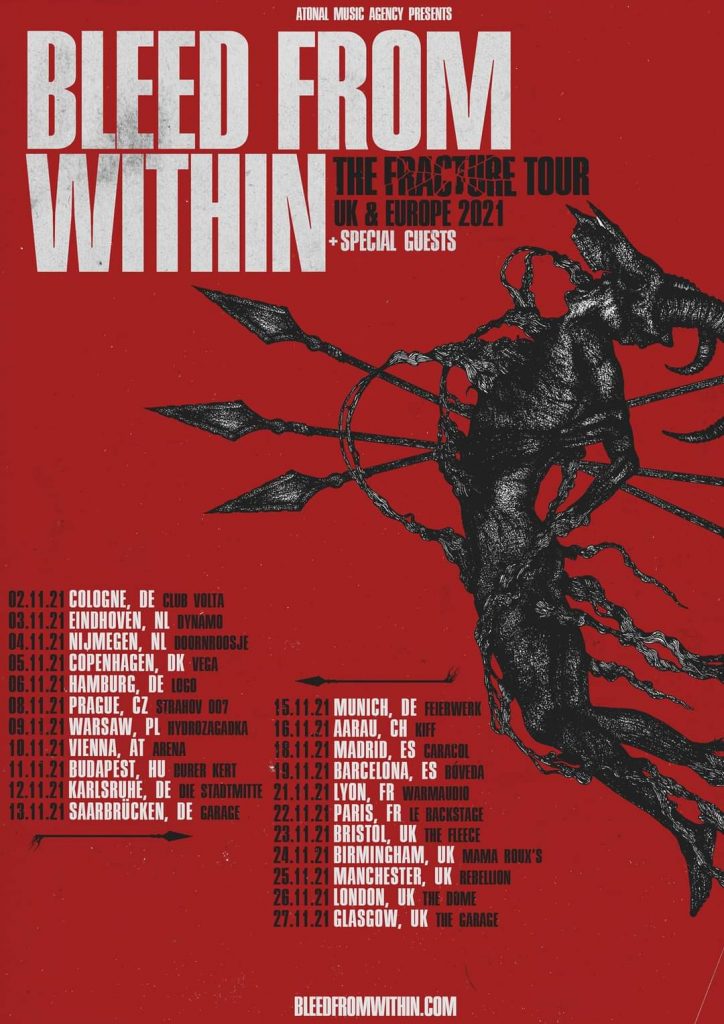