The annual journey to the Mecca that is Newark Showgrounds for Tech-Fest may have been disrupted for two years but with tickets carried over and a great selection of bands on offer, we couldn’t be more ready for years incarnation! Four days of wall to wall Metal of every flavour is just what the Doctor ordered with familiar faces, beers, wood fired pizza and all the rest. This is what life should be all about and we haven’t even mentioned getting the chance to catch up with the bands who have been  gracious enough to do interviews with us in recent times. Tech-Fest is the Underground Metal scene main arena and if you haven’t heard about it… We’re about to give you the low down.

Ballius [7/10] open the second stage and the day for the first time in three years with some Melodic Progressive Metal to a growing crowd as people are still arriving and pitching their tents but still draw a decent crowd. They have a new line up and new material in the works and on this evidence it’s going to be awesome. Blight Town [7/10] are a change of gear entirely with up tempo Post-Hardcore that brings out the two step early doors while we get a sweat on at the main stage for the first time. It may not be warm outside, but it’s as hot as hell in the hanger. A five string bass brings the funk and the bands Math-Rock sensibilities shine through and get a gutteral response from the Tech-Fest fam. Dakesis [8/10] bring the theatrics to the main stage with a dazzling display of virtuoso guitar work accompanying their Progressive Symphonic Metal. Despite only having a 30 minute slot they pull out the title track from their current album “Fractures“, a 15 minute magnum opus that is as majestic as it is on the album with a few extra nuances thrown in for good measure. Six string bass? Dual female vocal harmonies? A rumbling bass drum? They have it all and it’s epic. Azazel [8/10] bring the party, flipping the script entirely with Hawaiian shirts and firebrand Deathcore rumblings. The KoRn inspired “Lice” is a set highlight as the spin kickers come out in force. Closing their  tectonic plate shifting set with new song “Edge Of Death“, Azazel are a slice of brutality that we all need in our lives. Who doesn’t love a hopped up vocal and more breakdowns than a fleet of tow trucks can handle?

Welsh quintet Rosen Bridge [9/10] have certainly got not heavier and more Progressive in recent times and working with Andrew Wade (Wage War, A Day To Remember) on their 2021 single “Coward” has fired them up. Their DJent fuelled Metalcore offering includes some mesmerising dual tapping sections and their vocalist has impressive range, able to handle both the clean and unclean parts with a seamless switch. A new vocalist has brought a new darker edge to Sertraline [9/10] who impress with soaring clean vocals matched by bowel clenching lows wrapped in a DJent fueled bounce with “Inside Out” a real highlight. The band get honoured with the first circle pit of the day and while they are a bass player light, they make up for it with a duel guitar attack that brings a wealth of experience and shatters our expectations with a ferocious live show. They are so well received that they actually get booed when they announce their final song. A Night In The Abyss [6/10] take things several shades darker with their brand of macabre melodies from miserable England that brings shades of Cradle Of Filth from Brighton, loaded with theatrics, symphonic touches and blast beats for days. They do however suffer from technical issues with the vocals dropping out several times and a number of the nuances that made their last EP “Begotten” fabulous lost in the weight of the sound. The result leaves the band  sounding chaotic and ugly and while they save it towards the end, the momentum is sadly lost. The re-tooled Karybdis [8/10] play the Pins & Knuckles stage with 3 critically acclaimed albums under their collective belts and a stunning new EP “Order & Chaos“. Known for their aggressive high energy live performances they do not disappoint with new guitarist Dave Klussmann impressing. The London Death Metallers get treated to a conga and it’s one of those unforgettable moments that will go down in Tech-Fest history. Perhaps the surprise of the day finds Red Method [7/10] taking over the main stage and commanding an impromptu wall of death during “Messiah” that includes the bands synchronized movements as they go hell for leather with an intense live show that leaves their previous appearance at the festival in the rear view mirror. There are no two ways about it, the band are half past due a new album but with “The Absent” given a new lease of life in the live arena. They still worship Slipknot that little bit too much, replicating the mass sit down and jump up moment which the Iowa titans are famous for and is a little bit cliché but it’s still good fun.

They maybe the least technical band on stage today but London Metalcore merchants Confessions Of A Traitor [9/10] know how to put on a high energy live performance with vocalist Stephen MacConville leaving the stage behind and mixing it with the crowd, making his techs sweat as much as he does. The band are treated to fans doing the Macarena for the duration of “Man About Town” but before hand a cover of “Crawling” by Linkin Park goes do we now a sing-a-long storm. Beatdown Deathcore enthusiasts Bound In Fear [10/10] decimate the weak with the biggest pits of the day, snapping the necks of those who aren’t two stepping as vocalist Ben Mason astounds with his unclean vocal range. Make no mistake, these cuts are as personal as they come despite their wrapping and Mason even takes a moment mid set to remind us to take care of each other. The Unique Leader Records signings squeeze in downtempo breakdowns galore while Mason touches the void into Slam as the band threaten to take the roof off of the Pins and Knuckles stage. The bass rumbles, the riffs are heavy, the lyrics traumatic and yet everyone has a smile on their face as they participate in the cathartic release. Californian Progressive Metallers Artificial Language [7/10] meander through their set with vibrant technical leads and clean vocals while continuing to plough a furrow with 2019’s “Now We Sleep“. Unfortunately they come over as being a bit flat following the all out devastation of Bound In Fear but variety is the spice of life. The last time we saw Exist Immortal [8/10] was as a last minute headlining replacement at Rabidfest in November, playing Progressive Metal to an audience that were expecting a Deathcore band in Osiah and following a day that has been geared up for that. Whereas there they struggled, here they are in their element, playing to a packed main stage audience who they have eating out of the palm of their collective hands. We’re treated to a light show so bright it burns our retinas in accompaniment to their career spanning set that sees some rarely played gems put out for display, even raiding 2014’s “Darkness Of An Age“… 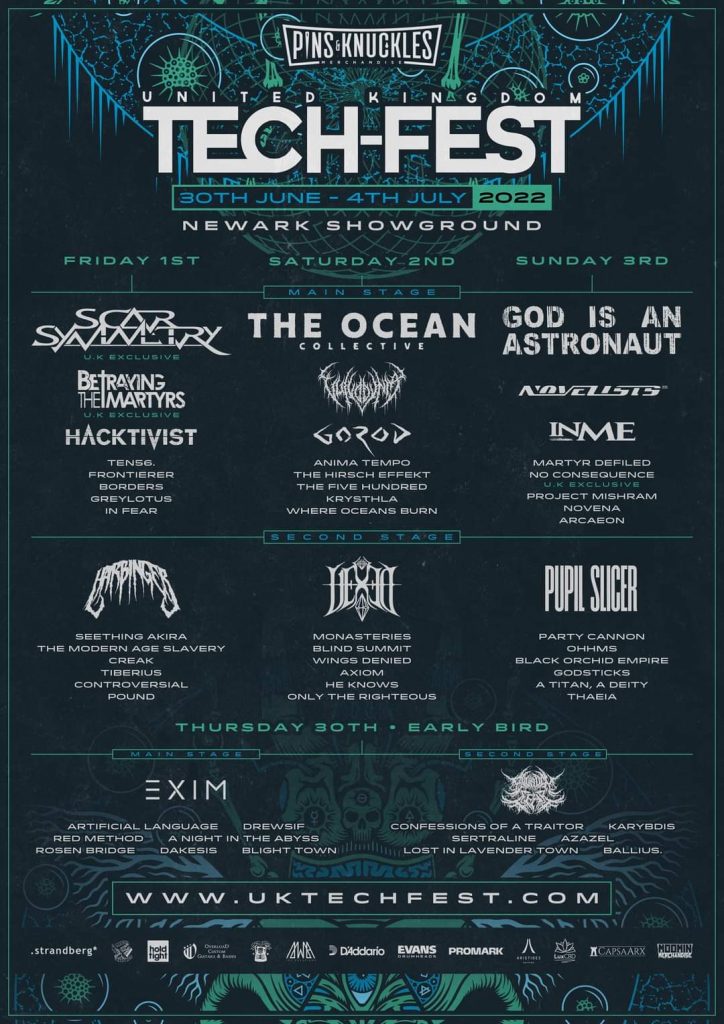