Skip to content
HomeReviewReview: “Blood Is Blood” by On Hollow Ground

Born in Leeds in 2013, Metalcore quintet On Hollow Ground (Jack Flynn [Lead Vocalist], Ryan Scott [Guitar and Vocals], Joe Wood [Drums], Chris Batty [Guitar], Bob Howe [Bass]) have been building a reputation for themselves on the Metal Underground Scene with a trio of EP including 2018’s “Constant State” setting them apart from the pack. During that time they’ve toured like road warriors, sharing stages with everyone from Light The Torch to InVisions and given influences panning from Born Of Osiris, Emmure and Veil Of Maya, through to Grime and contemporary hip-hop, they have got on board with producer Myroslav Borys (Confessions of a Traitor, Last Hounds) for this one, which seems an obvious choice.

Metalcore as a genre tag doesn’t even begin to cover the ground that On Hollow Ground do in the opening cut “Our Lives“. Out of the gate like a Juggernaut with some staccato DJent groove and some throat shedding vocals from Flynn, who sounds like he’s been brought up on early Deathcore, there is plenty of bounce for the mosh pit to handle here. The drop off to a Bring Me The Horizon esq programmed break with a female vocal harmony is an interesting move that might catch you off guard but allows for the band to build back via a clean sung verse into a full throttle finale. There is a distinct Linkin Park tone to the opening of “Broken” before it flows into far darker and more sinister territory, gradually slowing to almost downtempo before spinning back around. Stacking breakdowns upon breakdowns its a call to the pit from the start. Flynn shows off some impressive vocal range, mixing up the Deathcore isms with some far cleaner parts while also pausing for some moments of rap scream flow akin to Justin Johnston of Gift Giver. The heaviest of those vocal moments comes in “People Never Learn” as he offers some moments that touch the void into Slam as he roars “Go balls deep“. As with the earlier pair of cuts, this one offers more on the programming side with a primitive grime beat making the framework on which the rest of the music is build. This more commercial end of Deathcore makes On Hollow Ground a gateway band for a younger generation to get into music that is heavier and more intense by bringing other flavours to the mix that purists might not go for, but make for a time.

Bringing back another beautiful female harmony for a programmed introduction with a brilliant technical lead lick over it “Surviving Life” is the introduction to “…And Getting By” is a powerhouse cut that takes no prisoners. Pummeling rhythm section gymnastics keep a high energy groove going while the “by design, it’s do or die, surviving life and getting by” chorus turns this pit moment into a sing-a-long moment. 74 second single “WMD (Wasteman Down)” has that sinister, eerie vibe to it that has a clear Emmure influence and orientates around a hard hitting riff and single verse that the band could play over twice back to back in the live arena and you wouldn’t even notice, it’s that good. Title track “Blood Is Blood” is sonically a fine summary piece for the album as a whole while big chugging thick gauge 8 string guitar riffs raining down like thunder as Flynn rants and raves about using the pain of life a a fuel to survive the struggle. The haunting, off kilter piano break is a horror film nasty that works so well on multiple listens that it’s unbelievable. “Shut Down” includes a couple of trip-hop grime moments that sees riffs sweep the programming aside like it was nothing while echoing back nicely with another evil piano part. A varied and enjoyable listen with so much going on in each track, it wins a longevity award before it has even got out of bed. Having some Symphonic Death Metal parts adds intrigue to album closer “Even Though“, a track of raw emotion that sees Flynn wearing his heart on his sleeve, it aches with a pain wrapped in its beauty [8/10]

“Blood Is Blood” by On Hollow Ground is out now 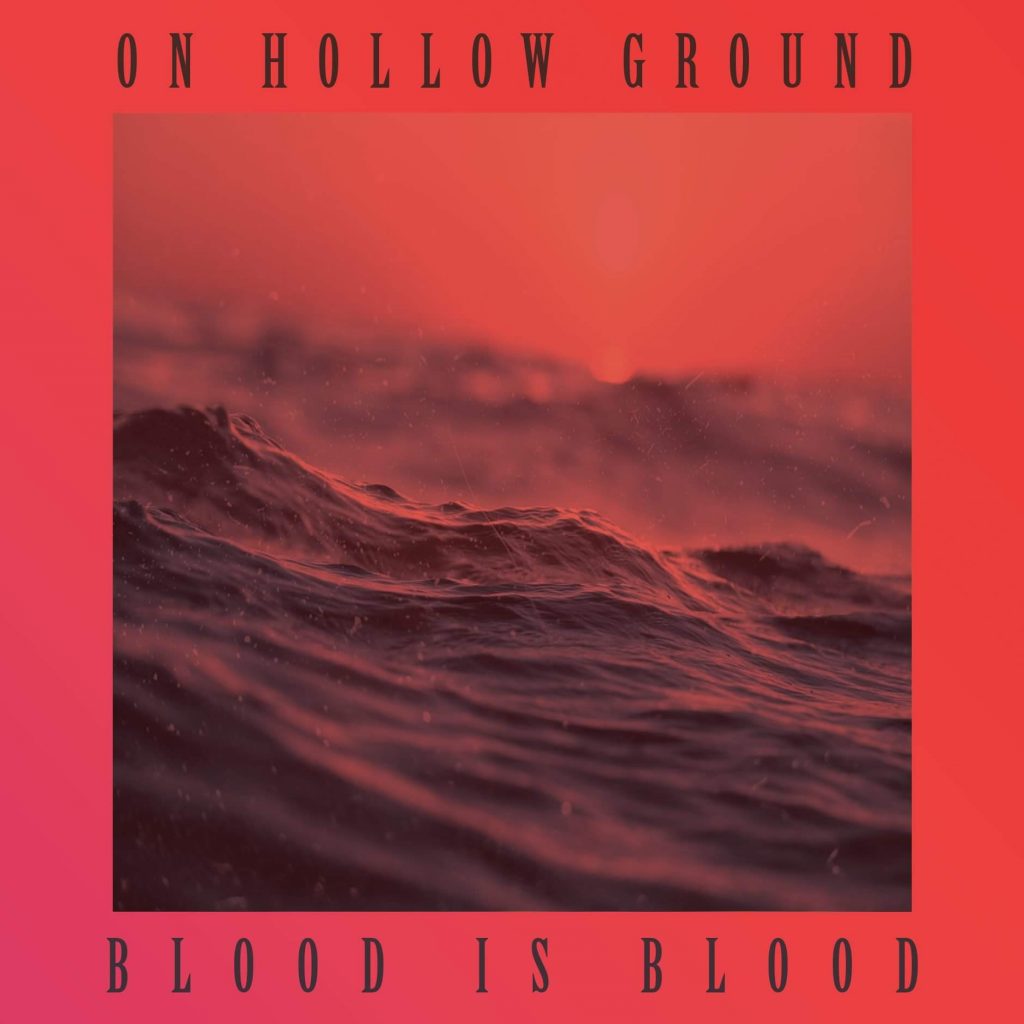